Degner puts No. 06 back in victory lane at State Park in George Seliger Memorial 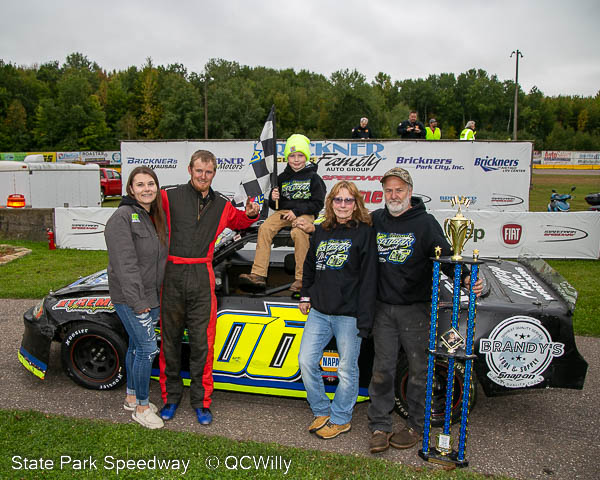 WAUSAU, Wis. (Sept. 24) – For himself, for fans and even for many fellow drivers, Zach Degner couldn’t have written a much better script for the first-ever George Seliger Memorial.

Racing on asphalt for just the second time ever, Degner drove the familiar No. 06 car formerly piloted by Seliger and still prepared by George’s father Jerry and family. Degner took it to victory, too, winning the 36-lap mini mod feature in the memorial race in honor of his good friend at State Park Speedway.

The Merrill driver got inside Pete Doxey for the lead on lap 28 and led the final nine laps to pick up his first-ever asphalt feature win. He also took home the $1,000 first prize for the race honoring the Wausau native, a four-time mini mods champion at State Park who lost his life in a motorcycle accident in July at the age of 28.

The third attempt to run the mini mods and mini stocks special in honor of Seliger proved to be the charm. Two previous attempts to run the event in conjunction with a TUNDRA Super Late Models race at State Park both were rained out, including most recently Sept. 11. The TUNDRA show was canceled, but State Park Speedway worked with event organizer Kole Ferge to make the race a part of the track’s already scheduled Eve of Devastation scheduled for Sept. 24.

The race appeared for much of the way to belong to Doxey, the Lino Lakes, Minn., driver who competes on asphalt and dirt and was racing at State Park for the first time. Doxey started on the inside pole alongside Mosinee’s Dale Louze and quickly took off, building a straightaway lead in the first ten laps.

Slinger Speedway regular Al Strobel of Iron Ridge and later Shawn Kemnetz of Hancock ran second to Doxey in the first half of the race, while Degner started fifth and slowly moved up. He took third on the 12th lap and then moved into second past Kemnetz on a lap 17 restart. Doxey still led with Degner lurking behind and the two were pulling away from the field when the second yellow came out with 14 to go.

The final restart saw Doxey and Degner again pull away, with Doxey still holding the lead until Degner got in turns one and two. With both rear wheels briefly leaving the ground in the corner, Degner nevertheless took over the lead and drove away, finishing nearly two seconds ahead of runner-up Josh Willhite of Wausau.

Kyle Stark and Karter Stark of Marshall staged a father-son battle for third in the closing laps with father Kyle holding off son Karter. Joe Kuehn of Wausau finished fifth while Doxey fell back to sixth at the finish. 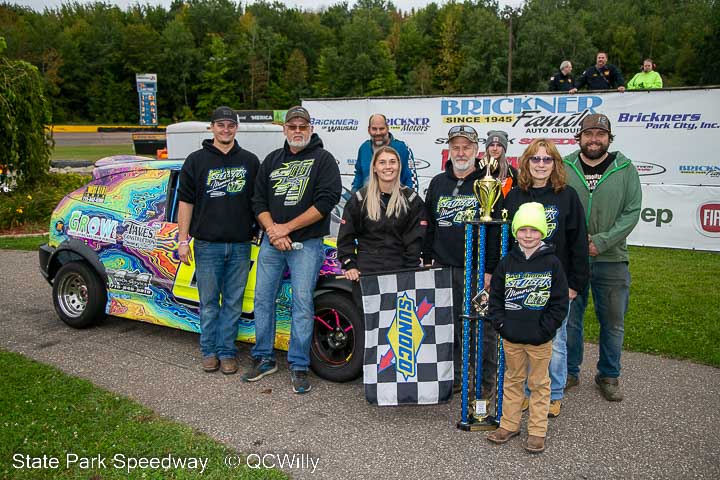 Mini stocks also were part of the program for the memorial, and Ashley Schoone added to her growing resume in 4-cylinder cars by winning the 26-lap feature for her first feature win at State Park Speedway this season.

The Gleason native has been tough with a number of feature wins on asphalt and dirt the past five years, including winning the Larry Detjens and Flip Merwin memorial races at State Park. She finished third in the point standings at State Park this season with ten top-five finishes in ten feature races run, but was held without a win until Saturday.

Schoone started eighth in the field of 14 starters and needed just nine laps to get to the front. She moved into fifth by lap 4, took third on lap 7 and was in second a lap later. Schoone then passed Tommie Elsinger of West Bend for the lead on lap 9 and never trailed again, including holding off Kyle Genett of Rudolph and Wausau’s Tom Lecher on a restart with five laps to go.

Genett would finish second with Lecher coming in third and Luke Mikula of Wausau. Brody Rivest of Sheboygan came in fifth with Elsinger taking sixth and Ashley Schoone’s dad Mark Schoone coming in seventh. Carson Sillars of Wausau battled Elsinger for the lead in the race’s early stages and wound up eighth.

Despite being rescheduled twice to late in September and even with cold and dreary fall weather, the race still succeeded in bringing together a cross-section of strong competitors in the state and beyond to honor Seliger. Ten of the 23 mini mod cars on hand were newcomers racing at State Park for the first time this season, and 14 of the 20 mini stocks also were first-time visitors this year.