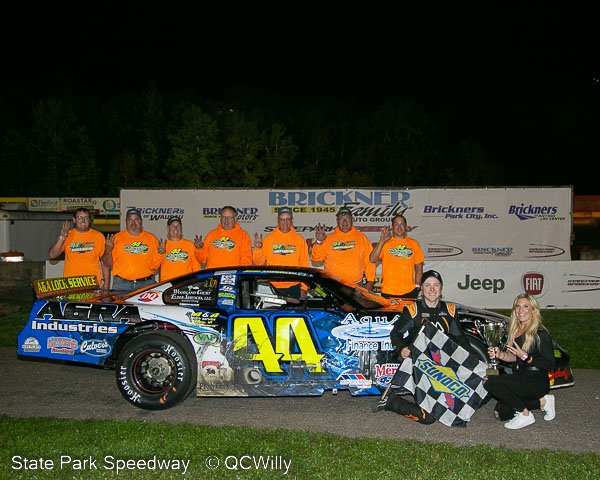 WAUSAU, Wis. (Aug. 25) – The number three was a good one for both Justin Mondeik and Travis Volm on Season Championship Night at State Park Speedway.

Mondeik joined some exclusive company at the track with his third consecutive Auto Select Super Late Models pres. by C-Tech championship, while Volm picked up his third feature win of the season, holding off Mondeik on the final night of weekly racing at the Rib Mountain quarter-mile for 2022.

Mondeik (716 points) finished 21 points ahead of Jason Weinkauf (695 points) to become just the third late model driver to win at least three consecutive championships at State Park. The Gleason driver joins two legendary names in the track’s history, following Dick Trickle (three straight in 1970-72 and again in 1981-83) and Wayne Breitenfeldt (seven straight from 1994-2000) as the only drivers to accomplish the feat in the track’s top division.

Mondeik also joins the club that includes Volm of drivers in all classes to win at least three straight championships. In addition to Breitenfeldt and Trickle, only Lyle Nowak (1996-2000 in legends), Volm (2011-13 in pure stocks), George Seliger (2016-18 in mini mods) and Brian Schramm (2018-20) in pure stocks have won at least three straight titles in the same class.

The 10th and 11th starters, respectively in an 11-car field, both Volm and Mondeik patiently made their way to the front in the 60-lap feature before battling each other for the final 22 laps.

Volm made the quicker charge to the front, moving into the top five just six laps in and past Dillon Mackesy into third on lap 18. He then zipped past early leader James Swanson for second on lap 21 and pressured Weinkauf for the lead before a competition caution after 30 laps.

Weinkauf would briefly clear Volm for the lead after the lap 31 restart, but the battle between the two No. 76’s would flip on lap 36 when Volm got under Weinkauf in turn 2, taking the lead and clearing him a lap later.

While his top championship challenger Weinkauf and Volm moved to the front, Mondeik dealt with heavier traffic early in the feature and was in eighth place on lap 20 when he had a brief scary moment. Rayce Haase spun in turns 3 and 4 in front of Mondeik, who steered clear and moved into sixth after Haase and Noah Gajewski were sent to the back after contact caution the yellow.

Mondeik quickly moved past Swanson for fourth two laps after the lap 20 restart, and then took to the outside to pass Mackesy on lap 27. He then followed Volm past Weinkauf on lap 38 into second, then spent the final 22 laps chasing the leader.

Mondeik made a brief attempt on the outside for the lead on lap 45 but quickly tucked back in behind as Volm held the inside line and got a good run off the corners. The two continued to run nearly nose-to-tail until a Gajewski spin in turn 2 on lap 54, setting up a final seven-lap sprint to the finish. Volm got a good jump on the inside of Mondeik on the restart, though, and went largely unchallenged over the final laps.

Weinkauf finished third in the feature, his tenth top-3 finish in ten nights and third finish of third this year after seven runner-up placements. The Merrill native entered the night 12 points behind Mondeik in the standings and was going for his first-ever State Park Speedway track championship, and for a time early on was in position to capitalize with Mondeik near the back. Weinkauf’s chances faded as Mondeik made his way through the field, and he finished second to Mondeik in the standings for the second straight year.

The race began with Swanson and Mike Cox Jr. starting on the front row, and Swanson would lead the first 17 laps, the strongest run of the season for the former New Jersey resident and ARCA Series driver now living in Pembine. He first cleared Cox on the opening lap and later fended off the outer groove challenge of Alex Volm to lead until Weinkauf moved into second and then made his move on the outside of Swanson on lap 18.

Mark Mackesy finished fourth in the feature with Dillon Mackesy fifth. Swanson would slip back to ninth at the finish.