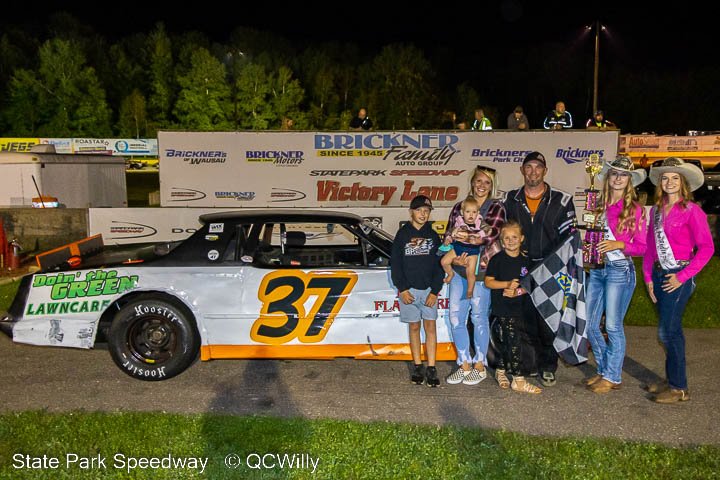 WAUSAU, Wis. (Aug. 25) – The season-long battle between Garret Strachota and Eric Breitenfeldt for the Rockstar Energy Drink Mini Stocks championship at State Park Speedway was so close, even the final checkered flag of the season didn’t reveal a season champion initially.

When Mark Schoone of Gleason edged Breitenfeldt to win the 20-lap feature on Season Championship Night while Strachota finished fourth, the result was a dead heat tie between Strachota and Breitenfeldt for the title with 828 points each. The championship came down to a tiebreaker, and Strachota held the advantage to claim his third career mini stocks crown at the Rib Mountain quarter-mile.

The first tiebreaker in the event of a tie is feature wins, and Strachota finished the season with four victories. That is one more than fellow Wausau driver Breitenfeldt, who crossed the line first in three features and also inherited the top spot after a disqualification in a fourth, though that is not considered an official win as first-place points are not awarded after a disqualification. If tied in feature wins, Strachota would’ve also had the advantage in the second tiebreaker of most fastest qualifying efforts, with a 3-0 advantage over Breitenfeldt.

Breitenfeldt held a slim lead on the outside of Mark Schoone on laps 12 and 13, and after contact between the top two Strachota made an attempt to pass both of them on the high side on lap 14. Strachota would back out, and the top two would remain nearly deadlocked for the next five laps.

Mark Schoone finally gained a slim advantage coming to the white flag, with Breitenfeldt still on the outside. Schoone would hold on to win by half a car length, and Ashley Schoone edged ahead of Strachota by 29 one-thousandths of a second to finish third. One more position difference from Strachota would’ve given Breitenfeldt an additional five points needed to clinch the championship outright.

The previous week’s feature winner Branden Sischo finished fifth and was one of a number of cars including Breitenfeldt, Ashley Schoone and Strachota in a three-wide bee’s nest for a number of laps that stayed clean. Tyler Muller of Sun Prairie ran in the top three for the first half of the race, finished 10th and clinched Rookie of the Year honors in the class.

With the help of a fellow racer, Wausau’s Mitch Stankowski clinched his second straight Advance Auto Parts Pure Stocks championship while Athens native Brian Plisch scored his first-ever feature win at State Park Speedway on a night when one of the track’s greats also closed out a stellar racing career.

Plisch took the lead from early leader Jim Annala of Westboro on lap 7, cleared him three laps later and pulled away as the pack raced side-by-side behind him. He went on to his second career feature win, his first coming earlier this season at Golden Sands Speedway.

Meanwhile, a smooth and often dominating season for Stankowski took a bad turn in practice laps before qualifying, when his car stalled coming off the track with a broken transmission. Stankowski was able to borrow the car of fellow competitor Brett Breitenfeldt, though, and despite pulling off late in the feature he finished 16 points ahead of Schramm in the season standings.

The night also marked the final race for Schramm, who is retiring from racing after an outstanding career at State Park that includes six track championships, including three straight in the pure stocks from 2018-20. Schramm posted a heat win on his final night and finished second in the feature. Wausau’s Jevin Guralski also wrapped up Rookie of the Year honors, setting fast time and finishing fourth in the feature.

Season Championship Night in the Snap-on Mini Mods proved to be a big one for the class’s two Snap-on sponsored No. 31 cars. “Snappy” Joe Kuehn of Wausau wrapped up his first-ever mini mods championship, while Wausau’s Josh Willhite ran away with the 20-lap feature race.

Willhite stormed into the lead on a lap 4 restart and quickly built a straightaway lead on his nearest competition. He held that lead to the end and cruised to his third feature win of the season.

Kuehn entered the night needing to just start the feature to clinch the championship, and he finished the season 10-for-10 in posting top five finishes, coming in fourth. He finished 54 points ahead of Willhite in the season standings, while Chad Ferge saw his feature race end early after hitting the outside wall in turn 2 and dropped behind Willhite to finish third in the standings. Hunter Landwehr of Stratford finished fifth in the feature and was the mini mods’ Rookie of the Year.

Zach Degner of Merrill finished second in the feature and also added a heat win in his first race at State Park and the return of the George Seliger No. 06 car to the track. Normally a racer on dirt at Tomahwak Speedway, Degner drove the car of Seliger, his friend and a four-time SPS mini mods champion who passed away in a motorcycle accident July 31.