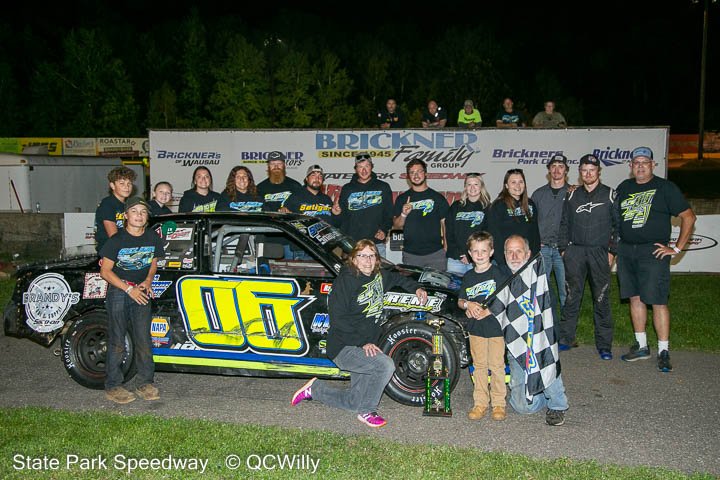 Making just his second-ever appearance at the Rib Mountain quarter-mile, Olson led all 25 laps to claim the Snap-on Mini Mods feature. The win came on an emotional night at the track and especially in the mini mods class where Seliger was a dominant force before losing his life at the age of 28 in a motorcycle accident July 31.

Olson started on the outside pole and took the lead from polesitter Brian Marquardt. The Stevens Point driver and points leader in the 4-cylinder mods at Golden Sands Speedway would hold the point the rest of the way in the caution-free event, maintaining enough of an advantage to withstand several brief slip-ups.

Olson had a healthy lead on lap 7 when he got sideways out of turn four, allowing second place Jim Lietz to close within two car lengths. Olson would steady from there, though, and slowly started building the lead again until a slide coming to the start-finish line to complete lap 12, again letting Lietz close in.

Olson would again slowly pull away from Lietz and maintained a four-car length advantage over the final laps to continue a hot stretch that also included a feature win at Golden Sands last week. Lietz finished second for a strong return in his first night out with his No. 93 car since it rolled and hit the fence in late May.

Hunter Landwehr of Stratford finished third for his career-best mini mods feature finish at State Park. Points leader Joe Kuehn recovered from a heat race accident in which his car lost a wheel and he briefly rode the backstretch wall, coming back to finish fourth in the feature and stay 55 points ahead of Chad Ferge in the standings.

Olson was one of several mini mod drivers on hand in memory of Seliger, who won four mini mod championships and dominated the last two years with wins in 13 of the class’s previous 16 features. The feature started with the sixth starting position left vacant in memory of Seliger’s No. 06. Seliger’s car also was brought out onto the track for opening ceremonies and was brought back out to take one more checkered flag at the end of the feature, then was parked in Brickner Family Auto Group Victory Lane with family and friends including his parents Jerry and Theresa Seliger and his son Bentley.

For all the side-by-side battles there have been weekly in the Advance Auto Parts Pure Stocks this season, Mitch Stankowski has consistently risen above the pack, and did so again Thursday night with his fifth feature win of the season.

Stankowski and Jeff Spatz dueled side-by-side for the lead for six laps in a battle of Wausau drivers until Stankowski took over first on lap 16. He led the rest of the way to win and continued increasing his points lead in the class as he closes in on a second straight pure stock championship.

Eric Breitenfeldt joined Garret Strachota as four-time feature winners in the Rockstar Energy Drink Mini Stocks this season and continued to keep the points battle close between the two Wausau natives by winning the 25-lap feature.

Breitenfeldt passed Tyler Muller of Sun Prairie on lap 10 and checked out on the field, winning by a full straightaway over his nearest competition to pull back within nine points of Strachota for the points lead with two weeks left. Ashley Schoone finished second, fending off Strachota for the entire second half of the race, first for third place and then for the runner-up spot when Branden Sischo pulled off into the pits while running second.

Muller finished fourth for his career-best feature finish and Amanda Rowe came in fifth. Mark and Ashley Schoone also posted a father-daughter sweep of the heat races and Strachota became the seventh different driver in the class this season to set fast time.

Alex Hartwig wasted little time getting to the front in the Ropa’s Pizza Bandoleros feature, taking the lead on lap 4 and leading the rest of the way in the 15-lap feature. The Portage native won his third feature in the class this season at State Park.

Not even a three-position penalty on lap 3 for an illegal three-wide pass did much to slow Hartwig’s march. He was moved back to fourth after the penalty, but still needed just over a lap to get inside Merrill’s Oliver Weinkauf to take the lead. From there he cruised to the win over Cohen Henze of Juda.

Racing is back at State Park Speedway next Thursday for the Wayne ‘Lodi’ Lodholz Memorial. Super late models, pure stocks, mini mods and mini stocks will be on hand and it also is season championship night for the Bandoleros. Fred Mueller Qualifying starts at 6 p.m. with racing to follow at 7:15 p.m.