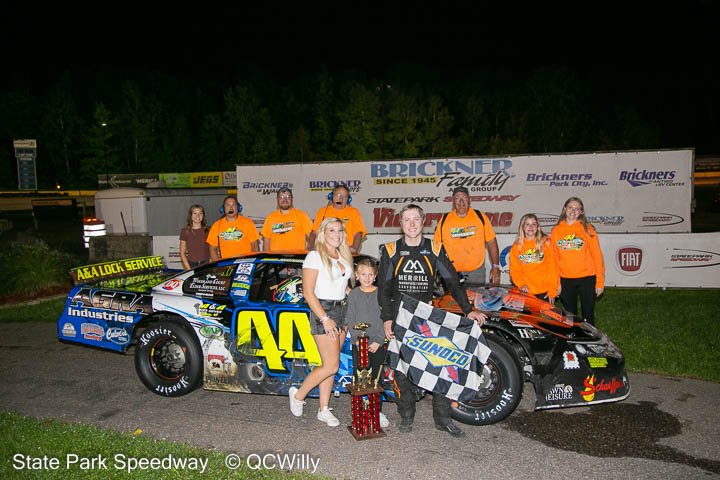 WAUSAU, Wis. (Aug. 18) – Justin Mondeik has won just about everything at State Park Speedway over the past three years. One of the few prizes that had escaped him was the Wayne ‘Lodi’ Lodholz Memorial.

Check off another box on Mondeik’s long list of accomplishments after the Gleason native won the Lodi Memorial for the first time Thursday. He breezed to the win in the 66-lap Auto Select Super Late Models pres. by C-Tech feature highlighting the 14th annual running of the race in honor of a popular longtime SPS racer who passed away in 2007.

Mondeik was running third early but took to the outside to pass first Jason Weinkauf and then leader M.G. Gajewski, clearing the latter on lap 20. He led the rest of the way for his sixth win of the season, putting him still on track to match his mark of a year ago when he won seven feature races at State Park.

Mondeik also picked up nine more points on Weinkauf in the point standings for the night and now enters next week’s final weekly show with a 12-point lead over the Merrill driver, who finished as runner-up in the feature for the seventh time in nine races this year.

The night wasn’t a smooth one all the way for Mondeik or most others in the super late models. A heat race spin by Dillon Mackesy on the front stretch sent cars spinning to avoid, and Mondeik spun into Mackesy with the right side of his car, the right side of his car damaged. Mondeik would continue in the heat, though, and finished second while Weinkauf also had troubles, with a flat tire causing him to spin and slap the wall in turn 3.

Trouble struck more on lap 7 of the feature when Noah Gajewski spun coming out of turn 4 on the front stretch in the middle of the track. Mackesy spun but first-time SPS visitor Austin Jahr couldn’t avoid Gajewski and received heavy front end damage. Alex Volm also was caught up in the accident, ending his first night in a super late model that included a heat win in his first race.

With his right side sheet metal reconstructed and taped up for the feature, Mondeik moved up to fifth after the first yellow, then took third from Rayce Haase on lap 10. Once in the lead he quickly built a big advantage, including after the midway yellow when he quickly pulled away from Brock Heinrich on the restart.

Weinkauf ran second behind Mondeik the final 33 laps and was initially in striking distance before getting loose off of turn 4 on lap 39 to fall well back behind the leader. Weinkauf was able to cut into the margin some in the closing laps but finished six car lengths back. Fast qualifier Travis Volm finished third with Heinrich fourth and Mackesy fifth.