Mondeik back on top with fifth SPS feature win of season 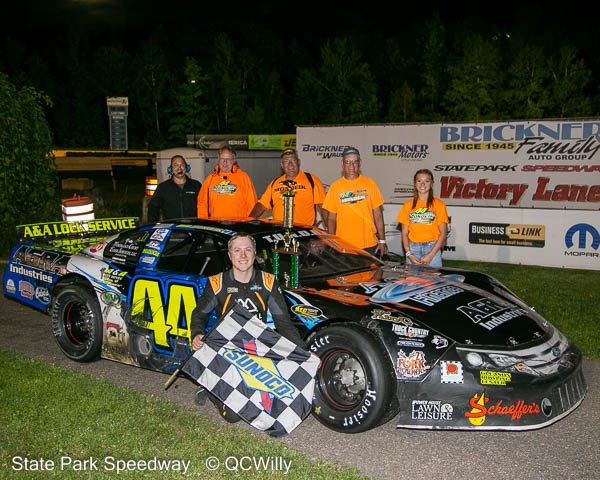 WAUSAU, Wis. (Aug. 11) – Justin Mondeik keeps piling up the wins, and with another he’s back on top of the point standings at State Park Speedway.

Mondeik had the right combination of speed, luck and staying out of trouble in winning his fifth feature of the season in the Auto Select Super Late Models. The win also allowed the Gleason driver to regain the points lead from Merrill’s Jason Weinkauf, pulling three points ahead with two weeks of racing left.

Mondeik made his move to the front shortly after a competition caution midway through the 50-lap feature. He drove inside Wausau’s Rayce Haase for the top spot on lap 30 and had smooth sailing the rest of the way for his 12th feature win of the summer at short tracks in Wisconsin and the Michigan Upper Peninsula.

The evening’s fast qualifier and starting seventh in the feature, Mondeik’s race got off to a slow start as he was caught in traffic through the first nine laps. His fortunes changed on lap 10, when Weinkauf and Travis Volm made contact on the frontstretch racing for second. The contact sent Weinkauf spinning across the finish line backwards, backing over a barrel and getting caught on the landscaping in Brickner Family Auto Group Victory Lane.

The caution put the No. 76 cars of Volm and Weinkauf both to the back of the pack, and Mondeik began to move forward after the race’s restart. He slipped past Jerry Brickner for third on lap 16 and was there when the competition caution flew after 25 laps.

Haase had taken the lead from Brickner on a restart on lap 7 after an early spin by Noah Gajewski, and he appeared strong in leading to the halfway point. The Wausau driver almost lost the lead on the lap 26 restart, though, as Mondeik from the second row got a nose under the leader before backing off going into turn three.

Haase would clear second-place Dillon Mackesy for the lead on lap 27 with Mondeik following to second, but Haase’s running high off the turns gave Mondeik an opening to the inside, and he took the lead on the backstretch on lap 30 and quickly pulled away.

Haase would stay in second the rest of the race. Weinkauf rallied to finish third, his eighth top-3 finish of the season and just second time not finishing as runner-up in the feature. Mackesy finished fourth with Brickner fifth.

Volm and Mark Mackesy posted heat wins. Mondeik netted a 12-point gain on Weinkauf for the night, coming in nine points behind but taking the lead back after Weinkauf had assumed the top spot for the first time this season after the class’s previous race July 14.