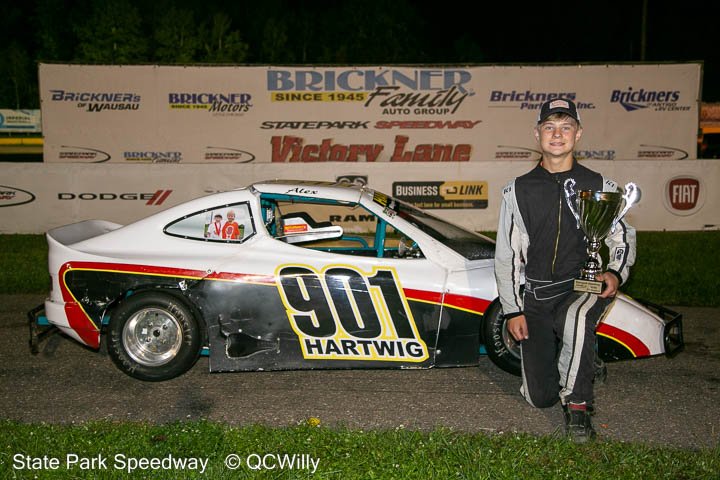 Hartwig wrapped up his third Bandoleros points championship at State Park in four years with a clean sweep, setting fast time, winning his heat and then taking the 15-lap feature on season championship night for the class Thursday night.

The 14-year old from Portage finished the Bandos’ season with his fourth feature win in six nights at State Park. He took advantage with an inside pass when Penn Sauter slipped up high on lap 6 and led the rest of the way for what was also his 14th feature win at the track since 2018.

In making his way to the front, Hartwig avoided a pair of messy situations in turn four in the early laps of the feature. The first came on lap 5 when Ayrton Brockhouse spun while running fourth in a 13-car field. The number of cars attempting to avoid him included Mason Oleson spinning and the left rear of his car tagging the wall, while Axel Oldenhoff also was collected. The second came again on lap 5, when Neillsville’s Laci Stargardt-who had led the first four laps-spun in front of the field. Ayden Brockhouse tangled with Bentley Thompson and did not return to the race.

Hartwig moved up from running seventh before the first caution to third place after the second. He quickly moved into second past Oliver Weinkauf, shortly after Sauter took the lead, and needed less than a lap to get by Sauter too. Cohen Henze finished second with Sauter coming home third.

Hartwig likely was racing a Bandolero for the last time at State Park. The youngster already has more than 100 career victories and in addition to Bandoleros has also been racing Legends and 602 late model cars.

The race of the night came in the Snap-on Mini Mods, where Hunter Landwehr and Keagen Benz put on a terrific show for the first 22 laps of the 25-lap feature. Yet at the end it was neither coming home the winner, as Joe Kuehn of Wausau stole the show in the end with a last lap pass for the feature win.

Kuehn got inside Landwehr for the top spot in turn two of the final lap for his first and only lead of the race to claim his second feature win of the season. The victory also put “Snappy Joe” in prime position to win his first-ever season championship next week, as he holds a 66-point lead over Chad Ferge in the standings with one week of racing left.

The race was a remarkable side-by-side battle between Benz and Landwehr, with the two trading the lead time and again for 22 laps. Benz led the first eight laps, almost all of them by little more than a nose over Landwehr, and from there the two traded the lead seven times.

Lap-after-lap Landwehr would get a strong run on the outside in turns 1 and 2 before Benz would come back in turns 3 and 4. Kuehn lurked in the first row behind the leaders from the start of the race but was boxed in until taking a look inside Landwehr going into the first turn on lap 23,

Kuehn would not make the pass immediately but would capitalize when Landwehr slipped up high on the final lap. Kuehn would win and the final laps shuffle saw Landwehr finish second, Jim Lietz third and Benz slipped back on the outside to eighth at the end.

Stratford’s Branden Sischo put mechanical gremlins aside for a week to win his second Rockstar Energy Drink Mini Stocks feature of the season.

Sischo took the lead from Tom Lecher on the outside on a lap 7 restart and then showed muscle on a restart with nine laps to go in the 20-lap race, pulling away from points leader and fast qualifier Garret Strachota. Sischo has had one of the fastest cars in the class when not dealing with mechanical troubles, and he finished a good night that also included a heat win.

Strachota and Eric Breitenfeldt continued their season-long battle at the top of the point standings by racing side-by-side for the final eight laps of the feature. Breitenfeldt edged Strachota for second, meaning Strachota enters the final week with a 10-point lead over Breitenfeldt in the standings.

Jeff Spatz led all 25 laps in the Advance Pure Stocks feature, driving away from the field quickly from his outside pole starting spot. Spatz’s car was disqualified after not passing post-race inspection, giving Brian Schramm of Wausau his third win of the season.

Jevin Guralski finished second in the feature with Bo Bennish holding off Mitch Stankowski for third. Stankowski will go into the final race with a 40-point lead over Schramm at the top of the pure stock point standings.