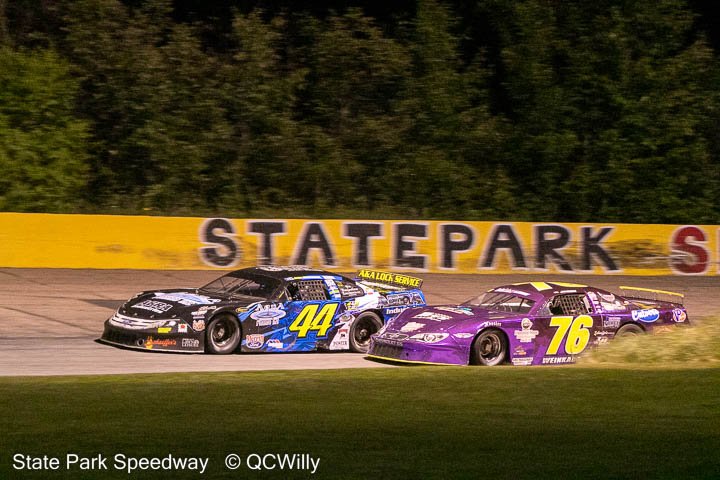 WAUSAU, Wis. (Aug. 24) – The points battles between Justin Mondeik and Jason Weinkauf in super late models and Garret Strachota and Eric Breitenfeldt in mini stocks both come down to the final night of weekly racing at State Park Speedway Thursday.

Mondeik is aiming for his third straight SPS super late models championship, and he enters Thursday with 642 points on the season, 12 points ahead of Weinkauf’s 630 points. The Gleason native has a chance to join elite company at State Park, for with another title he would become just the third different driver to win three straight championships in the track’s top class, joining Dick Trickle (three straight from 1970-72 and again in 1981-83) and Wayne Breitenfeldt (seven straight from 1994-2000) have won three in a row. In all, just six drivers in SPS history have won three or more straight championships in the same class, with others including Lyle Nowak (1996-2000 in legends), Travis Volm (2011-13 in pure stocks), George Seliger (2016-18 in mini mods) and Brian Schramm (2018-20 in pure stocks).

Weinkauf has seemingly spent most of the season chasing Mondeik, yet with his consistency has stayed right with the two-time defending champion all year. Mondeik has won six features-one short of his total of seven feature wins a year ago-and has led the points for every week but one.

By contrast, Weinkauf is without a win, having finished tantalizingly close time and again as runner-up in the feature seven times. The Merrill driver’s consistent second-place finishes paid off in late July when he took the points lead after Mondeik had a tough night July 14th. Since then, though, Mondeik has won back-to-back features in August and carries big momentum going into Thursday night.

“It would be a great honor to win three in a row,” said Mondeik, who also is on track to win the championship at Norway Speedway in the Upper Peninsula of Michigan. “It feels great to have success there consistently throughout the past few years. It’s been a fun year with Jason, a lot of back and forth. It should be a great night!”

“We’ve had a pretty interesting year,” said Weinkauf, who is searching for his first-ever SPS championship and also finished second to Mondeik a year ago. “A lot of runner-up finishes, and the two other races we finished third. I think that consistency, along with two fast times, is why we are still within striking distance. We are due for a win, so there is no better time to do it than this week…(to win the championship) would be pretty awesome.”

Weinkauf also has run into bad luck the last two weeks, including a heat race incident last week that required significant repairs, and he noted Mondeik borrowed the team a bunch of parts for his No. 76 car after the incident and it was much appreciated.

The mini stocks point race is even closer, with Strachota entering the final race with a 10-point edge over Breitenfeldt, 765 points to 755. The two Wausau drivers and good friends have been close for the entire season, with four feature wins each, but Strachota has held a slim lead most of the year from the time he won the first two features of the season in May.

Strachota and Breitenfeldt have been close on the track all season, with both finishing in the top five in every feature with the exception of Strachota coming in sixth June 16th after being involved in a mid-race accident. It has even extended to Golden Sands Speedway in Plover, where the two have combined to win six features (Strachota 4, Breitenfeldt 2) and Strachota leads Breitenfeldt by eight points at the top of the standings.

The two already account for three mini stocks titles at State Park Speedway between them, including the last two. Breitenfeldt-nephew of former SPS late model champion Wayne Breitenfeldt-won his first championship a year ago, while Strachota edged out Kyle Check for the championship in 2020. Strachota also was first in the class in 2017.

The point races in all four weekly classes are still undecided going into the final week, though two are likely in good hands of the current leaders.

Mitch Stankowski is in line for his second straight Advance Auto Parts Pure Stocks crown, leading Brian Schramm by 40 points and Jevin Guralski by 52 heading into Thursday night. Stankowski has won five features in the class this year and also has been fastest in qualifying seven times in ten weeks. Schramm also has three feature wins this year and will be racing for the final time, as the six-time SPS track champion plans to retire from racing after the season.

The Snap-on Mini Mods points race is all but decided, as Joe Kuehn leads Chad Ferge by 66 points heading into the final night. Kuehn likely needs to only start the feature to clinch his first-ever track championship.