Volm bests Weinkauf in battle of No. 76s in Dave Lashua Memorial 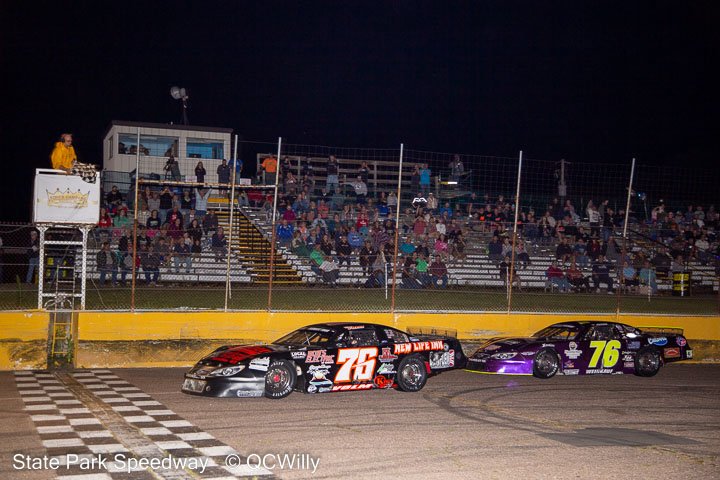 WAUSAU, Wis. (July 14) – The Dave Lashua Memorial at State Park Speedway was another highlight in what is turning into another pretty stellar year for Travis Volm, as well as a bitter-but-sweet night for Jason Weinkauf.

Volm held off Weinkauf on a restart with four laps left and won the 50-lap Auto Select Super Late Models feature as part of the sixth-annual Lashua Memorial. The Mosinee native now living in Wausau won his second feature of the season at State Park, joining Justin Mondeik as the only winners of multiple features in the class this season.

The win also was the third super late model win of the season in Central Wisconsin for Volm, a five-time pure stock champion at State Park who also won at Golden Sands Speedway last Friday and has established himself as a super late model contender to win every week whether driving his car or the Wayne Brevik-owned No. 7-11 car at Golden Sands.

Volm took the lead inside M.G. Gajewski on lap 12 and led the final 39 laps. It was far from a stress-free drive, though, as much of that came with Weinkauf lurking close behind, and even closer after a caution came out with four laps left.

The two No. 76 cars were lined up side-by-side coming back to the green for a four-lap dash to the finish, and Weinkauf on the outside got a half car length jump as the flag flew. Trouble developed behind the leaders in turns one and two, though, as Dillon Mackesy and Rayce Haase got together and Jerry Brickner’s car also sustained damage, resulting in a brief red flag and Haase being towed off.

Volm and Weinkauf were lined up side-by-side again for the second attempt at a restart, and this time Volm got a jump coming to the flag and cleared Weinkauf with three laps left. The race wasn’t over, as Weinkauf first took a look coming off turn two on lap 48 and then got into the back of Volm in turn three on lap 49, getting both cars loose briefly. Volm held on to keep the inside lane, though, and edged Weinkauf by a car length at the finish.

The silver lining to the evening for Weinkauf was his moving into the points lead for the first time this season, nine points ahead of Mondeik with three races left. A four-time feature winner this year and the two-time defending super late model champion, Mondeik had a tough go from the start of the feature, stuck on the outside most of the race and then spinning and receiving damage with four laps left. He finished seventh, his first time outside the top four in a feature this season.

M.G. Gajewski finished third in the feature for his best finish of the season. Noah Gajewski of Marathon posted his best-ever SPS super late model feature finish coming in fourth with Brickner rounding out the top five.