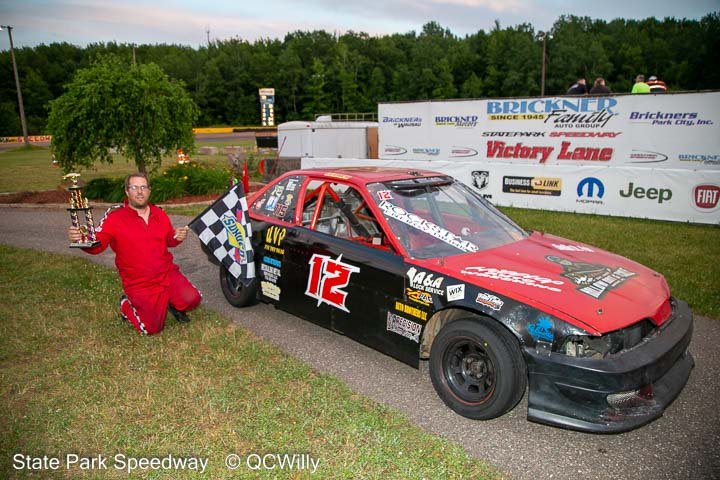 WAUSAU, Wis. (June 30) – No matter the series, car or surface, George Seliger has been just about unbeatable this season, and Thursday night was no different at State Park Speedway.

Seliger won his third feature race in three appearances this season at the Rib Mountain quarter-mile, this time racing with the Midwest Dash Series. The Wausau driver finished off a clean sweep, also setting fast time and winning his heat race with the compact car touring series, which races with the same rules as State Park’s weekly Snap-on Mini Mods class.

Seliger took the lead from Phil Malouf on lap 17 and won a five-lap side-by-side race between past State Park mini mods champions that followed the race’s lone caution halfway through the 30-lap feature. The Wausau native slowly pulled away and added to a resume this year that also includes feature wins on the dirt at Tomahawk Speedway.

Four different drivers held the lead in the first half of the race while Seliger was stuck in traffic early, but once loose he made his way through quickly. Malouf took the lead from Gary Garand on lap 13 and Seliger followed him into second one lap later. He restarted outside Malouf on the front row on lap 16 after a spin by Josh Tanguay, and the two ran side-by-side for five laps but Seliger slowly gained the advantage and cleared for the lead on lap 19.

Mitch Stankowski of Wausau continued his success in the Advance Auto Parts Pure Stocks with another feature, and did so essentially with one hand after an accident earlier in the night-in a bicycle race.

Stankowski participated in a bike race among SPS drivers at the conclusion of Wausau Noon Optimists Club Kids Night bicycle races at intermission, but shortly after the start his bike flipped end over end, with Stankowski ending up in a heap on the ground.

He injured his wrist but with an assist from his sister Megan, a physical therapist and crew member on the team, had it heavily wrapped and iced for the pure stock feature. Unable to wrestle the car as he typically might, Stankowski still moved into second behind Alex Volm of Mosinee on lap 8 of the 25-lap main. He slowly caught Volm and finally found an opening on the inside on lap 23 to make the pass and win his fourth feature of the season.

Tom Lecher picked up his first feature win of the season in the Rockstar Energy Drink Mini Stocks, outrunning Eric Breitenfeldt in a battle of Wausau racers.

Lecher took the lead from Tyler Muller of Sun Prairie on lap 9, but then had a mirror full of Breitenfeldt for the second half of the 20-lap race. Lecher held a two-car length lead while using a high line coming out of the corners, but Breitenfeldt could never get much closer and finished second for his sixth top-three feature finish of the season.

The victory was the second career feature win at State Park for Lecher and first since 2019. Lecher has been especially strong at Golden Sands Speedway and Marshfield Motor Speedway in recent years, winning championships at both tracks. Wins have been harder to come by at his home track, though he set fast time and finished fourth a week ago and had a string of five straight fast times between the three tracks until Zach Budleski was fastest Thursday night in qualifying.

State Park Speedway will take a break next week with no racing but will return Thursday, July 14 with the Dave Lashua Memorial. Super late models, pure stocks, mini mods and mini stocks will race with qualifying beginning at 6 p.m. and racing to follow at 7 p.m.