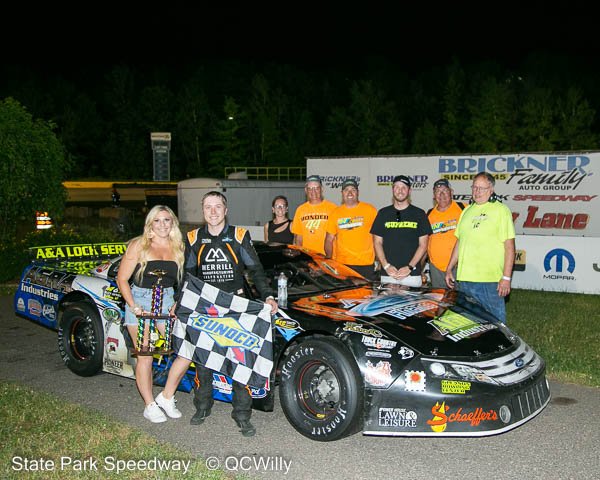 WAUSAU, Wis. (June 30) – A showdown in the final laps between the visiting star and the reigning champion gave fans a dramatic finish at State Park Speedway Thursday night, but as he often has over the last three years, Justin Mondeik again had the answer.

With visiting NASCAR Cup Series driver Erik Jones on his outside on a restart with five laps left, Mondeik got a good jump and went on to win the Auto Select Super Late Models 75-lap feature that highlighted L&W Supply Kids Night at the speedway. The win was the fourth feature win of the season for the Gleason driver, the two-time defending champion in the class at the track.

Mondeik took the lead for good on lap 20 and led the rest of the way, including getting the best of three restarts in the final 25 laps. He bested a healthy field of 17 cars for his fourth feature win of the season and 11th at State Park dating back to the beginning of last season.

Mondeik got off to good starts on restarts all night, including lining up on the outside of Travis Volm of Wausau on a lap 20 restart. He gained an advantage coming to the green flag and cleared Volm one lap later for the top spot.

Volm continued to follow closely behind Mondeik most of the first 50 laps but slowly began losing contact as the leaders encountered lapped traffic. Jason Weinkauf also was close behind Volm in third as the cars raced to a competition caution with 25 laps remaining.

While the leaders cruised to the planned yellow flag, Jones was making a dash from the very back of the field into contention. The Richard Petty GMS Motorsports driver who races full-time on NASCAR’s premier series was racing as part of a six-race super late model schedule this summer for Chris Wimmer and Wimmer Motorsports, but he had to go to the pits just four laps into the race after a chain reaction on the backstretch led to Jones getting into Mark Mackesy and Aaron Marthaler and M.G. Gajewski also all getting collected with light damage.

Restarting 17th in the 17-car field, Jones worked his way into the top 10 by the time Brock Heinrich spun in turns three and four on lap 20. He soon after surpassed early leader Kolton Guralski for sixth on lap 28, got inside Tristan Swanson and into the top five on lap 31 and then passed Noah Gajewski after contact on lap 44.

Jones eventually got inside Volm for third with 15 laps left, while the race up front had Mondeik fighting off a charge from Weinkauf. The Merrill driver who has been in contention but just short of victory all season got as close as Mondeik’s rear bumper in turns three and four several times but could get no closer. The race appeared to be over when with five laps left Noah Gajewski spun on the backstretch, setting up a final five-lap dash to the finish.

Weinkauf chose to start behind the leader Mondeik on the restart, allowing Jones a chance to restart on the outside of the front row. The anticipated battle fizzled quickly, though, as Jones drifted high coming out of turn four and Mondeik was clear for the lead shortly after the green flag dropped.

Weinkauf also got by Jones on lap 72 and finished second for the fifth time in six features this season. Volm also got by Jones with two laps left, after the two made contact in turn three fighting for the same spot on the track. Dillon Mackesy of Athens finished fifth with a strong run coming up from the 15th starting position.