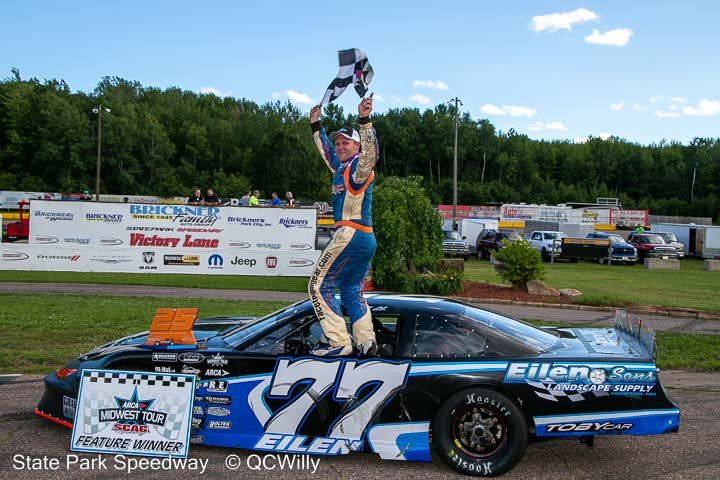 WAUSAU, Wis. (July 24) – Ty Majeski dominated much of the day in his quest for a second straight Larry Detjens Memorial win. Casey Johnson dug deep to put on a charge for the lead in the final laps for the second time in three days.

Two of the Midwest’s very best short track racers of the last decade waged a battle for first at the end Sunday afternoon at State Park Speedway, but as it turned out neither would win. Instead it was Jonathan Eilen of Hampton, Minn., stealing the show in the end and winning the 125-lap ARCA Midwest Tour super late models feature and highlight event of the rain-delayed 42nd annual Detjens Memorial presented by Dun-Rite Exteriors at the Rib Mountain quarter-mile.

Eilen led just three laps, but they were the final three as he became the 27th different driver and first from Minnesota to win State Park’s signature event honoring the Wausau native and short track racing star who lost his life in a racing accident in 1981. The ARCA Midwest Tour veteran and 2012 series champion also ended a long dry spell, winning his first feature in the series since 2013.

“Man, these things are hard to come by,” said Eilen after in a post-race interview in Brickner Family Auto Group Victory Lane with ARCA Midwest Tour series announcer Eric Huenefeld. “You just keep fighting and they come…you almost forget how emotional these things are. Obviously Ty and Casey had the cars to beat, but hey, at this point in my career I’ll take it any way I can get it.”

A consistently good run all day had Eilen in the right place at the right time at the end. He inherited the lead with three laps left when Johnson got into the back of leader Majeski on lap 122, causing Majeski to spin in turn 1. Both were put to the back of the pack of cars on the lead lap, putting the third-place running Eilen into first with only a final single-file restart and three-lap shootout left.

Eilen had Wausau’s Jeremy Lepak behind him with former State Park track champion Luke Fenhaus also in third, but the veteran got off to a good start and Lepak could never get quite as close as the leader’s bumper. Eilen held on to win with Lepak coming in second and Fenhaus in third.

The final 14 laps were filled with drama in a race that was dominated much of the way by Majeski, who won last year’s event and wasn’t even an entry until Saturday’s Detjens program was pushed to Sunday due to rain.

A regular on the NASCAR Camping World Truck Series who finished seventh in the event at Pocono Raceway in Pennsylvania on Saturday, Majeski filed his Detjens Memorial entry Saturday evening after the race was moved to Sunday, and he looked fully in control leading 88 of the first 111 laps.

A full straightaway lead over Johnson much of the way started to slip away as the leaders took on heavy lapped traffic in the race’s second half, and the race took on a new look when Mark Mackesy spun on lap 112 to bring out the caution.

The field bunched up behind Majeski, whose first concern appeared to be John Beale, the day’s fast qualifier who had made a charge through the field to third. Beale then was the first to choose the outside on the restart, lining him up alongside Majeski with Johnson in the second row inside behind the top two.

Majeski got a big jump on the restart, though, and Beale slipped back. Johnson stayed right with the leader, though, and coming out of the second turn he briefly had a look inside for first. Majeski closed the door, but Johnson would continue to hound him for the lead, putting on a final push reminiscent of his rally late to win the Big 8 Late Model Series Friday night on the first night of the Detjens Memorial.

Beale would eventually fall back and retire from the race with nine laps left, while Eilen had moved from starting fifth on the restart into third. Johnson then took to the outside of Majeski with seven laps left and tried the next three laps before slipping back until seeing a brief opening at the end of the front stretch on lap 123. He made brief light contact with the leader, but it was enough to send him loose and into a spin to bring out the caution. That put Eilen into the lead and set up the final dash to the finish.

Majeski, Eilen and Chris Weinkauf were the only three drivers to lead in the race, with Weinkauf starting on the pole and holding the top spot until Majeski chose the outside lane and moved from fourth to second for the race’s first restart on lap 24. Wausau drivers were well-represented in the final finish and throughout, though.

Lepak ran in the top five most of the way and followed up a strong run in the Slinger Nationals earlier this month to place second. Fenhaus overcame a spin early to move back through the field and picked up four spots in the final 14 laps to finish third. Two-time 2022 SPS super late model feature winner Travis Volm also was near the front all race long and finished fourth, super late model rookie Kolton Guralski progressed all race and finished fifth, and three-time Detjens champion Weinkauf finished sixth in his first start of the season. Guralski and Wausau’s Brock Heinrich also won the dash races and Mackesy added a win in the qualifier.

Eleven cars finished on the lead lap, and of the 21 cars to start the race 19 were still running at the finish.