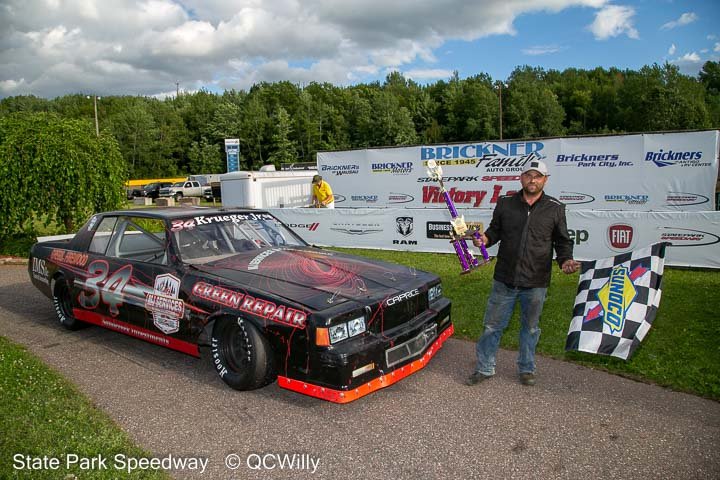 Krueger bested a field of ten cars to win the 25-lap Advance Auto Parts Pure Stocks feature to close out the second and final day of the 42nd annual Detjens Memorial. The Sparta native started on the pole and led all 25 laps in his first-ever appearance at State Park.

A regular and frontrunner in the hobby stock classes at Tomah Sparta Speedway and La Crosse Fairgrounds Speedway, Krueger nearly won the first heat race before Dave Cabelka came on the final lap on the outside and edged him out by a fender. He was even better holding off the field in the caution-free feature, and in fact went largely unchallenged.

“Well, it’s very tricky, it’s not what I expected to be, these guys have got something figured out,” said Krueger after of the track in a post-race interview with SPS track announcer Brandon Aschenbrenner. “Fortunately I got lucky…we were changing the car, doing this, doing that, trying to get a little more speed out of it. Well it kind of paid off.”

Krueger was able to hold the lead first by holding off a challenge by Cabelka on lap 7, and then extended it after Cabelka and Brian Plisch spent more than ten laps fighting each other for second. The two were side-by-side the entire time, until Plisch on the inside finally broke free on lap 19, after Krueger had built up a straightaway lead.

Jevin Guralski of Wausau was one of a number of hard chargers caught up behind the duel for second, and he finally got by Plisch on lap 21 for second, with Wausau’s Mitch Stankowski quickly following behind in third. The two had little time to catch the leader, though, and Krueger won by four car lengths at the finish.

“Oh yeah, I saw that battling back there, I was just hoping it would stay back there,” said Krueger. “(And then) I saw the other guys coming, I knew I was running out of time…I got lucky.”

Guralski finished second with Stankowski third. Brian Schramm of Wausau won the second heat and finished fourth with Plisch holding on to come in fifth.

George Seliger continued to make the most of his appearances at State Park Speedway this summer, winning his fourth feature of the season at the track and his third racing with the Snap-on Mini Mods.

Seliger remained unbeaten in feature races at State Park this season, biding his time while Mosinee drivers John Lietz and Dale Louze waged a side-by-side battle for the lead early. The two raced door-to-door for eight laps with Seliger looking for an opening, but there was little space until Lietz finally cleared Louze on lap 10.

Once with room to operate it didn’t take Seliger long to get to the front. He took the lead from Lietz and led the rest of the way. Points leader Joe Kuehn of Wausau closed in late but finished 1 1/2 car lengths back in second, with Josh Willhite of Wausau third, Lietz fourth and Louze fifth.

Brian Marquardt of Weston won the first heat for his first-ever race win. Louze also added a win in the second heat.

The latest blow in the season-long two-man battle for the top spot in the Rockstar Energy Drink Mini Stocks was struck by Garret Strachota. After Eric Breitenfeldt won Friday’s Detjens feature to close within a single point of first in the points, it was the points leader Strachota answering with the feature win Sunday.

Strachota broke a tie with Breitenfeldt in wins to take his class-leading fourth feature of the season. He ascended to the top spot midway through, taking the top spot from Mark Schoone after Breitenfeldt and the leader both briefly got loose contesting first.

Strachota cruised to the win from there with Ashley Schoone of Gleason second, Tom Lecher of Wausau third, Breitenfeldt fourth and Mark Schoone fifth.

Kendra Baumann of Wausau won the eight-lap semi-feature, while heat winners included Jeremy Whitman of Milwaukee, Mark Schoone in heat two and his daughter Ashley in the third heat.

Portage’s Alex Hartwig and Cohen Henze of Juda battled for the win in the Bandoleros class twice Sunday afternoon. Henze won the first by inches in the class’s third heat race but Hartwig won the big prize capturing the 15-lap feature race.

Hartwig chased Henze for seven laps before making his move on the backstretch on lap 13, getting inside Friday’s Detjens feature winner. Hartwig would go on to win his second feature of the season, with Henze finishing second and Lincoln Cain of Slinger coming in third.

State Park Speedway takes a break from weekly racing for the next two weeks, with its next race show coming Saturday, Aug. 6 when the TUNDRA Super Late Model Series visits.