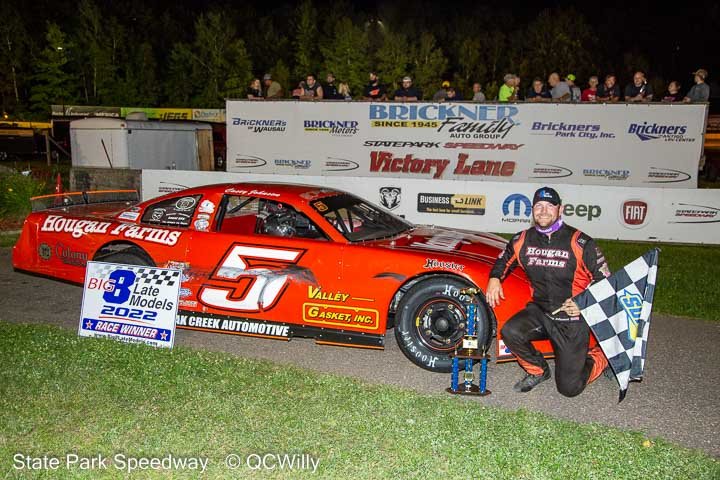 WAUSAU, Wis. (July 22) – The great ones find a way, and given one more chance in the Big 8 Series annual trip to State Park Speedway, Casey Johnson capitalized.

Running second to Grant Brown much of the way, Johnson closed in late and took the lead with five laps left on his way to winning the Big 8 late models’ 58-lap feature event to highlight the first night of the 42nd annual Larry Detjens Memorial.

Johnson got back by the car that had passed him for the lead earlier and won for the second time in the Big 8’s 11 trips to State Park and the first time since 2013. It also was the 12th Big 8 win all-time for the Cambridge short track ace, a two-time Big 8 series champion who in recent years has piled up a racing resume to match any driver in the Midwest.

“When the 14 (Brown) passed me, I thought he had the best car hands down,” said Johnson in a post-race interview trackside with Big 8 announcer Eric Huenefeld, “but I told my spotter at the end we’re going to see what this thing’s got, keep the pressure on, and we wound up up front.”

The race’s final restart with 15 laps to go proved to be the opportunity Johnson needed to catch Brown, who led 30 of the 58 laps and was searching for his first Big 8 win.

Brown had built a comfortable lead after two previous restarts in the race’s middle stages, but it quickly became apparent something was different after the resumption on lap 44. This time Brown did not get away, and with ten laps to go Johnson was lurking just a few car lengths back.

Johnson closed to the bumper of Brown by lap 50, and after another run made contact with Brown’s bumper going into turn 3 on lap 52, causing both cars to get loose. Brown held on but Johnson got another run on lap 53 and this time got to the inside of the leader.

The cars were side-by-side for a lap but Johnson cleared for the lead on the backstretch on lap 54. He would pull away in the final laps to win by six car lengths over Brown, who had to fight off a challenge from a fast-closing Owen Giles of New Market, Minn., on the final lap.

“I used to do this stuff all the time, it’s good to get back to my roots,” said Johnson, who regular runs super late models but still makes occasional starts with the Big 8 Series and at Jefferson Speedway. “I love running these limited lates, you just get up on the wheel, and if it doesn’t like it you drive it harder.”

Brown appeared to have the field covered after he took the lead from Johnson on lap 23 and after some paint trading between the two started to pull away. The Prior Lake, Minn., driver was fastest in practice sessions, the second-fastest qualifier for the night and a heat race winner, but instead had to be happy finishing second in the Big 8 race at State Park for the second straight year.

“It’s definitely not bad,” said Brown of his finish. “I’ve looked up to that guy, to be able to trade bumpers and doors with him, and to be able to learn from him a little bit hopefully for the next time is really awesome.”

Giles finished third in his first appearance at State Park, staying out of trouble and slowly picking up spots to be there in the end in a race that included six caution flags. Jerry Mueller of Richfield finished fourth, leading the race’s first 12 laps from the pole and staying in the top five all race. Big 8 points leader Dale Nottestad of Cambridge came in fifth. Defending SPS Big 8 race champion Jon Reynolds Jr. followed Johnson and Brown to the front early and was running third when he slowed suddenly on the front stretch on lap 43 and went to the pits done for the night.