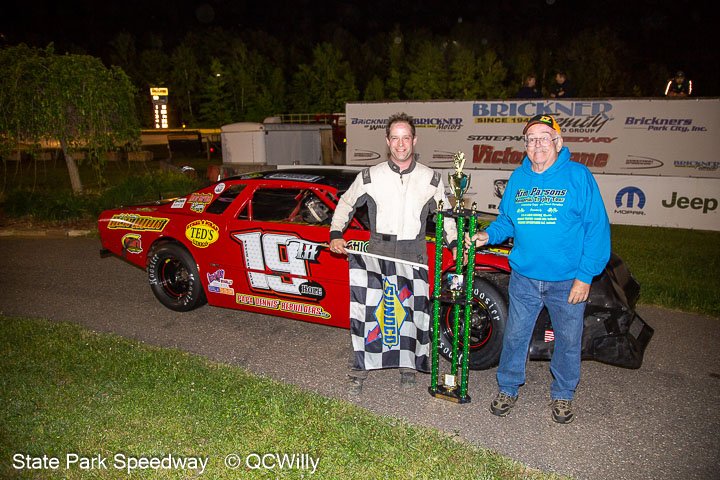 WAUSAU, Wis. (June 9) – The competition at the top in the Advance Auto Parts Pure Stocks at State Park Speedway got even tougher Thursday night, but Mitch Stankowski found a way to stay just a cut above the pack again.

Stankowski waded his way through traffic that caught up other fast cars, getting inside Bo Bennish of Gleason for second on lap 13. It appeared he may have to settle there, though, as Breitenfeldt continued his best-ever feature run in the class at State Park. He held the inside while leading the first 17 laps, including holding off previous SPS feature winner Jevin Guralski of Wausau in a seven-lap side-by-side battle earlier in the race.

Stankowski stayed right behind in the battle between Wausau natives, though, and finally received an opening on lap 18 when Breitenfeldt drifted high on the backstretch. Stankowski cleared him one lap later and went on to finish tops of a nine-car field that also included the return of Bennish, a former limited late model frontrunner at State Park and Tomahawk Speedway who also got by Breitenfeldt late for second. Brian Schramm of Wausau finished third with Breitenfeldt fourth and Guralski fifth.

Garret Strachota and Eric Breitenfeldt have been the dominant cars in the Rockstar Energy Drink Mini Stocks at SPS the last year-plus, and the two put on a show in the class’s 20-lap feature that resulted in Strachota winning his third straight feature to start the season.

The inside groove was where most feature-winning work was done on Thursday, but Strachota took to the outside of Breitenfeldt on lap 10 to begin a side-by-side battle between the two friends off the track that lasted the entire second half of the race.

Strachota made strong runs on the back stretch and finally inched ahead on lap 14. He appeared ready to clear for the lead when Breitenfeldt closed back in on the corners and charged back to lead at the line on lap 18 and again coming to the white flag. Strachota edged back ahead on the final lap and finished half a fender ahead at the finish.

Fast qualifier Brad Abt of Schofield was in the tracks of the leaders the final ten laps and finished third. Branden Sischo of Stratford won the semi-feature to qualify for the feature and then charged up with a strong run to finish fourth in the feature with Ashley Schoone of Gleason fifth.

Joe Kuehn of Wausau made it three different winners in three weeks in the Snap-on Mini Mods, taking the caution-free 20-lap feature.

Kuehn ended the bid of first-time SPS visitor Carson Strese of Jefferson, who took the lead from Dale Louze of Mosinee on lap 8. Strese was making his car work on the high side until getting too high on lap 15, allowing Kuehn to get inside and drive away to join Josh Willhite and Chad Ferge as feature winners this season. Ferge came in second with Strese third, Louze fourth and Willhite fifth.

Alex Hartwig of Portage bided his time through a number of cautions to best a competitive 14-car field in the Bandolero feature, the Bandos’ first appearance at State Park this season.

Hartwig slipped inside Penn Sauter of DeForest for the lead on lap 10 and led the rest of the way to claim the 15-lap feature. He held off a fast-closing Ayrton Brockhouse of Shakopee, Minn., at the finish, with Sauter taking third, Wausau’s Paxton Benz fourth and Lincoln Cain of Slinger fifth.

Hartwig came from the 10th starting spot and prevailed in a race that included four cautions, one including early leader Sauter and Axel Oldenhoff of Lake Mills getting together on an unsuccessful restart with nine laps to go. With no laps completed both cars received their spot back, but the damage to Oldenhoff’s car eventually was too much to continue, allowing Hartwig to move into second and start alongside Sauter on a final restart with eight laps left.