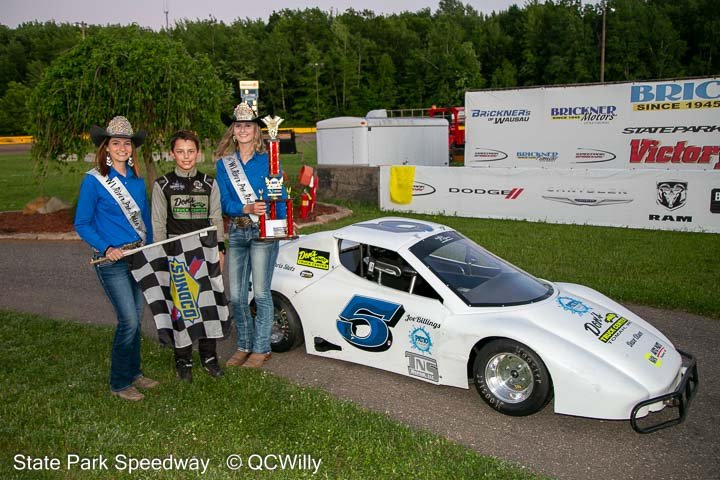 WAUSAU, Wis. (June 16) – The Sauter family through three generations has piled up numerous feature event wins over decades, but likely few by a closer margin than Thursday night at the Flip Merwin Memorial at State Park Speedway.

Twelve-year old Penn Sauter of DeForest made a last lap pass attempt of Ayrton Brockhouse of Shakopee, Minn., and at the checkered flag he edged Brockhouse by four one-thousandths of a second for his second career feature win and first-ever E.H. Wolf and Sons Bandolero feature at State Park.

The son of former NASCAR Camping World Truck Series champion and current part-time truck series competitor Johnny Sauter and grandson of the late Jim Sauter, Penn Sauter led just the final lap in the 15-lap feature. He chased leader Brockhouse for the final ten laps, including after a restart with four laps left.

Brockhouse appeared in line for his first career feature win at SPS especially when Sauter received a challenge from Cohen Henze of Juda for second with two laps left. Sauter was able to shut the door on Henze, though, and then drove to the inside of Brockhouse on the backstretch on the final lap. The leaders came to the checkers side-by-side with Sauter in the familiar family No. 5 car ahead by inches at most, with Henze finishing third.

It felt like the movie Groundhog Day in the Advance Auto Parts Pure Stocks on Thursday. For the second straight week it was Brett Breitenfeldt of Wausau leading almost the entirety of the first 17 laps and appearing in line for his first-ever pure stock feature win at State Park. Also for the second straight week, though, Mitch Stankowski of Wausau closed in late and got by Breitenfeldt on the inside on the backstretch on lap 18 on his way to the win.

Defending class champion Stankowski won his third feature in four nights this season, again getting through difficult traffic that included an outside pass after an eight-lap side-by-side battle with Jeff Spatz. Inside polesitter Breitenfeldt cleared Jevin Guralski early and led all but one of the first 17 laps for the second straight week, but was unable to hold the bottom off of Turn Two allowing Stankowski to make the pass. Breitenfeldt held on for second for his best SPS feature finish in the class with Spatz third.

Another defending champion made his return in the Snap-on Mini Mods, and George Seliger showed no signs of rust in dominating the caution-free 20-lap feature.

Jim Lietz of Mosinee also made his return to racing three weeks after a scary crash rolling his car in the Turn Two catch fence. Driving his dad John’s car, Lietz raced side-by-side outside Hunter Landwehr of Stratford for most of the final 12 laps of the feature and finished seventh.

The Wausau native won eight of 11 features in the class a year ago but has been racing on the dirt at Tomahawk Speedway this season as his young son Bentley begins his racing career there. Seliger brought back his same car from a year ago to State Park for the first time this season, and he set fast time and needed just six laps in the feature to overtake Gary Garand of Weston for the lead on the way to an easy win.

Branden Sischo of Stratford appeared to have his first career feature win in the Rockstar Energy Drink Mini Stocks when he held off Eric Breitenfeldt of Wausau to cross the line first in the 20-lap race. Sischo’s car did not pass post-race inspection, though, and the resulting disqualification gave Breitenfeldt his first feature win of the season at the track.

Sischo had made a run to the outside to go three-wide with the leaders midway through the race and then battled Clayton Phillips of Marathon side-by-side for the top spot for six laps before taking the lead on lap 15. Brad Abt of Schofield tied his career-best feature finish by coming in second to Breitenfeldt and Phillips posted his best-ever feature run finishing third.

Several laps of exciting three-wide racing also ended badly for several cars, as Brian Duranceau of Tomahawk spun in the second turn on lap 10 and the car of Amanda Rowe of Mosinee went hard into the Turn Two water barrels. Both Duranceau and Rowe’s cars were towed off with heavy damage. Points leader Garret Strachota of Wausau also suffered damage in the accident but returned and finished fifth.

Zack Rogers of Wausau also was a double winner in the mini stocks, including a heat win plus victory in the 10-lap semi-feature. Rogers led all ten laps of the semi with Max Manowski of Wausau second and both transferring to the feature, where Rogers would add a ninth-place finish.

State Park Speedway is back in action again next Thursday with a full show including the Jerome Brickner Memorial. Super late models, pure stocks, mini mods and mini stocks will race with qualifying beginning at 6 p.m. and racing to follow at 7 p.m.