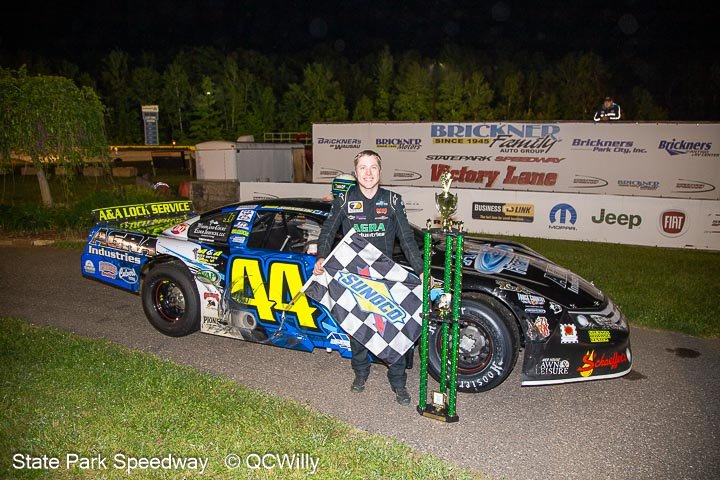 WAUSAU, Wis. (June 9) – Just when it appeared Justin Mondeik would be frustrated for a second straight week in his attempts to get to the front in feature racing at State Park Speedway, the door finally opened.

Mondeik found an opening inside Parker Retzlaff to take the lead on the 39th lap of the Auto Select Super Late Models pres. by C-Tech feature, and he would go on to take the 50-lap feature race that capped an extra-large third racing show of the season at the Rib Mountain quarter-mile, one that also included the return of Legends cars to the track for the first time in 20 years.

Mondeik finally won a hard-fought 15-lap battle with Retzlaff, the Rhinelander native who races part-time on the NASCAR Xfinity Series. He got inside Retzlaff on the back stretch with 11 laps left, pulled away from him on a restart with seven laps left and maintained a slim lead the rest of the way over Weinkauf.

Retzlaff, driving the Wayne Brevik-owned 7-11 car for the first time this season at State Park, had impressed for much of the race, taking the lead from the inside pole and leading the first 25 laps before a competition caution. He then fought off Mondeik after the caution, with the two going door-to-door for five laps before Retzlaff cleared for the lead on lap 30.

Cautions on lap 31 and 35 for spins set the two cars side-by-side again, but Retzlaff took the lead both times. Just as he did two weeks earlier when he was stymied lap after lap by Travis Volm in the feature, Mondeik was right in the leader’s tracks, and he received the break he needed when Retzlaff slipped high on the backstretch on lap 39. Mondeik elbowed his way in, and cleared Retzlaff one lap later. 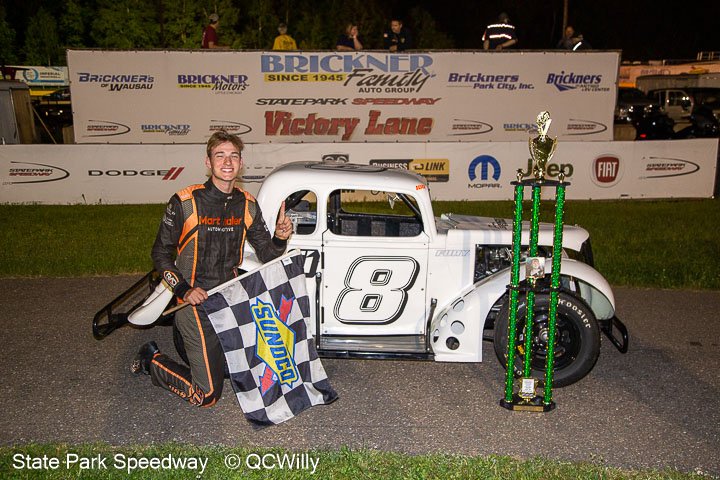 Thursday night also marked the return of Legends cars to one of the tracks instrumental to bringing the cars to Wisconsin in the 1990s, and Tristan Swanson of New Market, Minn., won the 20-lap feature.

A past winner on the Midwest Truck Series who now competes on the ARCA Midwest Super Late Model Tour, Swanson started ninth of ten cars but needed just three laps to move to third. He then followed Levon Van Der Geest of Merrill past early leader Adam Hansen of West Salem, and after three laps looking inside was able to get alongside Van Der Geest for the lead on lap 8. Swanson drove away from there to win on the first of three straight nights of Legends cars racing in Central Wisconsin, with the cars appearing at Golden Sands Speedway Friday night at Marshfield Motor Speedway Saturday.

Van Der Geest finished second in his first time racing a Legends car with Minnesota’s Tyler Ledbetter placing third. The scaled down replicas of cars from the 1930s and 1940s raced weekly at State Park from 1995-2002 under longtime promoter Phil Bickley.