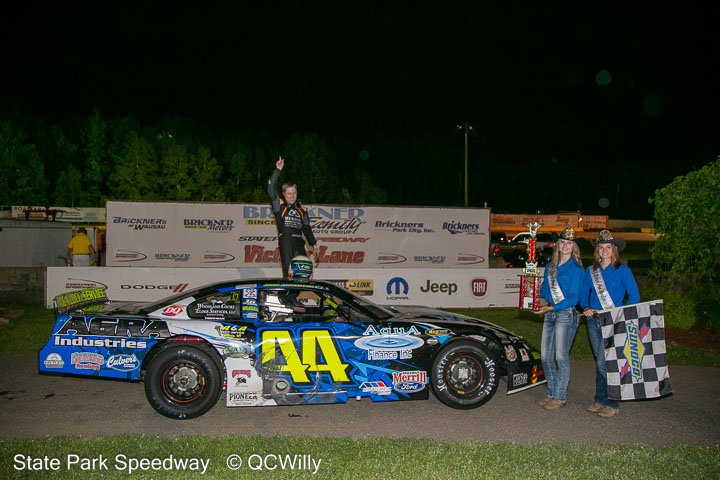 Mondeik needed just 18 laps to get to the lead and led the rest of the way in the 75-lap Auto Select Super Late Models pres. by C-Tech feature to highlight the 19th running of the Merwin Memorial, honoring a former stock car and snowmobile racer who died in a snowmobile racing accident in 2003.

Mondeik made his patented move to the inside on the backstretch on lap 18 to get inside early leader Kolton Guralski of Wausau for the top spot. He led the rest of the way, including driving away quickly on two late restarts and winning by ten car lengths over Jason Weinkauf of Merrill.

The two-time defending super late model champion at State Park and winner of seven features a year ago, Mondeik has needed no help with a dominant car going on three years now. A messy start to the feature proved to be to his benefit, though, as a number of contenders were bruised before a lap even got in.

A chain reaction in Turn Four on the first lap included Brock Heinrich of Wausau spinning and a number of cars receiving damage, including fast qualifier Travis Volm of Mosinee. Volm would have to go to the rear of the 15-car field after briefly going in the pits to check damage to the nose of his car.

A second attempt at starting included another chain reaction in Turn Four as Heinrich slowed and Rayce Haase of Wausau and Noah Gajewski of Marathon received damage. Heinrich went to the pits with damage and wouldn’t return until lap 18. An eight-car invert to start the race had Mondeik starting eighth in the field, but after the incidents he was up to fifth by the time leaders took the green flag for a third time, and when the outside line was slow initially at the start he needed just two laps to move to third.

Polesitter Guralski, Weinkauf and Mondeik were nose-to-tail early with Mondeik getting inside Weinkauf for second on lap 10. He trailed Guralski for the next eight laps until making his move on lap 18 and clearing for the lead a lap later.

Mondeik would lead by 8-10 car lengths for the duration of the race, including as the leaders navigated lapped traffic. A scheduled competition caution was issued with 25 laps left and another yellow came out with 20 to go after a spin by Jerry Brickner, but second-place Weinkauf and third-running Jeremy Lepak both chose to start behind Mondeik on the inside both times, allowing Guralskis two more chances on the outside of the front row. Mondeik drove away quickly both times and was unchallenged the rest of the way.

Weinkauf finished second in the feature for the fourth straight week with Lepak third, Mark Mackesy fourth and Haase fifth. Guralski finished sixth in his first appearance in a super late model at State Park.