Brickner honors grandfather with victory in his memory at State Park 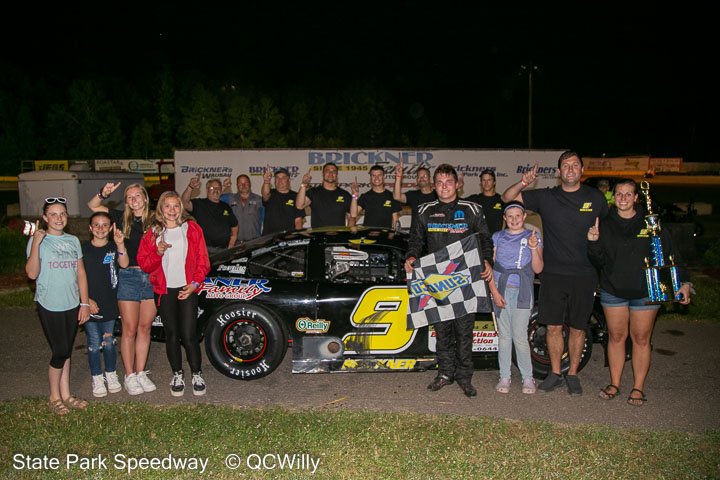 WAUSAU, Wis. (June 23) – A night honoring his grandpa could not have turned out much better for Jerry Brickner at State Park Speedway Thursday night.

Brickner won the highlight event in the first Jerome E. Brickner Memorial, taking the 60-lap Auto Select Super Late Model feature. The win was his first feature victory of the season and first in nearly five years in a super late model at the track.

Brickner took the lead for good on lap 36 with a strong run on the outside of Wausau’s Mark Mackesy on the race’s second and final restart. He would open up a big lead in the late stages and won his first super late model feature since returning to the class after running the Midwest Truck Series the past four years.

“Yeah, I haven’t won in a super late model in a long time,” said an admittedly nearly speechless Brickner in a post-race interview with track announcer Brandon Aschenbrenner. “To have it happen again on a night like this is just awesome.”

The Brickners have been a prominent family in Wausau and Central Wisconsin for many years, known by many for the Brickner auto dealerships. The Brickners also have been big supporters of local racing for decades, including sponsoring the late Larry Detjens, and a memorial race was established in honor of Jerry Brickner II after his death at 83 years of age in March.

Jerry Brickner IV didn’t appear to be a challenger for the win in the first half of the race. Starting on the outside of the second row in an 11-car field, he backed up to sixth when the inside line moved early and remained there the first 30 laps.

The fight initially appeared it would be one between Mackesy and Travis Volm of Wausau, who had a strong car for the second straight week and needed just seven laps to move into second behind polesitter Mackesy. Volm would ride behind Mackesy for the next 15 laps, then briefly challenged on the outside for the lead before settling back into second with a competition caution looming halfway through.

Three-time feature winner Justin Mondeik of Gleason also was in third lurking slightly behind the top two, but the race changed on lap 30 when Volm suddenly slowed in turn three just before the caution. His race would be finished due to engine overheating, and the lineup to restart the race provided more drama.

The top four cars including Mackesy, Mondeik, Rayce Haase and Noah Gajewski all chose the inside lane. That allowed fifth-place Brickner to move to the outside of the front row, and he would hang tough on the outside for the next five laps, leading lap 31 before Mackesy edged ahead on the next four laps.

Caution would come out again on lap 36 when Gajewski spun between turns one and two, and Mackesy and Brickner lined up on the front row again. This time it was Brickner getting a good jump at the green flag, and he would power ahead to clear Mackesy for the lead on the backstretch. Haase also challenged Mackesy on the outside for second before falling back on lap 39, the side-by-side battle allowing Brickner to sail away alone up front.

Brickner would go on to post a popular victory that included a big crowd of Brickner family and employees on hand. Mackesy would hold on to finish second while Jason Weinkauf of Merrill got by Mondeik in the final laps for third. Weinkauf hounded Mondeik over the final laps, getting to his bumper several times and finally nudging inside on lap 58 and making the pass a lap later.