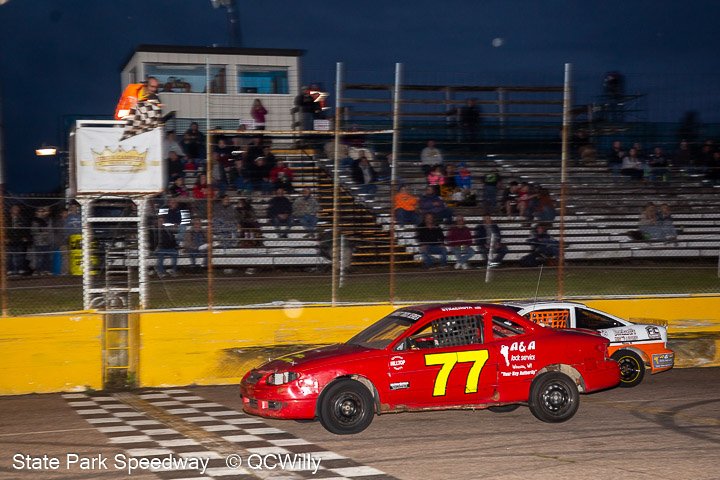 WAUSAU, Wis. (May 26) – In yet another action-packed Advance Auto Parts Pure Stock feature with plenty of jockeying for position, patience paid off for Mitch Stankowski.

State Park Speedway’s defending pure stocks champion, Stankowski needed almost all of the 25 laps but eventually foiled Brian Plisch’s attempt at a first career feature win, taking over the lead late on the way to win his first feature of the season.

An evenly matched seven-car field saw a number of strong cars shuffled from near the front to the back of the pack throughout, but Stankowski was boxed in by traffic a good portion of the race. He finally found an opening on lap 17 when Jeff Spatz of Wausau tried unsuccessfully to go to the outside to challenge Plisch, who built an early lead and for a time appeared to have the field covered.

Stankowski would then take a look underneath Plisch on lap 19 before going to the outside a lap later. He would lead at the line at the end of lap 20 and then pulled away in the final laps for the win. Brian Schramm finished second while Plisch came home third after leading 17 of the first 19 laps.

Chad Ferge got to the front quickly in the Snap-on Mini Mods feature, and once he did it was smooth sailing. The Wausau driver led the final 15 laps for his second career feature win in the class at State Park and his first this season.

Ferge started eighth in a field of ten cars but the outside line moved early and he was outside John Lietz of Mosinee for second on the third lap. He then overtook Dale Louze of Mosinee for the lead on lap 5, cleared him a lap later and would finish a full straightaway ahead of last week’s feature winner Josh Willhite with Joe Kuehn finishing third.

Earlier in the evening, the second mini mod heat got off to a scary start when on the first lap inside polesitter Hunter Landwehr slid up the track into Jim Lietz of Mosinee. The cars touched tires and the contact sent Lietz’s car airborne and it rolled once and then went nose first into the catch fence before landing on its wheels on top of the wall. Lietz walked away uninjured.

Garret Strachota of Wausau continued a hot start to his racing season, outlasting Brad Abt of Schofield to win the 20-lap Rockstar Energy Drink Mini Stocks feature. The victory was his second straight to start the season at State Park and his third feature win of the month including a win at Golden Sands Speedway last week.

Strachota took advantage of a golden opportunity midway through the race to get to the front. While Abt had a big lead on the field, Strachota was running fifth on lap 12 when the motor of the car of Wyatt Lutz went up in a plume of smoke, but would restart second on the outside of the front row after the top four cars all chose to start on the inside line.

Strachota and Abt would spend the final nine laps racing side-by-side for the lead. Abt held a slim lead for the first lap after restarts on lap 12 and again on lap 15, but Strachota went back ahead the following lap both times. Abt was still just one-half car length back as the cars took the white flag, but Strachota held on to win by that margin.

State Park Speedway will take a break from racing next week but will return in two weeks, Thursday, June 9. A full show will include super late models, pure stocks, mini mods and mini stocks plus Bandoleros and legends cars on the program. Qualifying begins at 6 p.m. with racing to follow at 7 p.m.