Mondeik picks up where he left off, rolls to feature win in opener 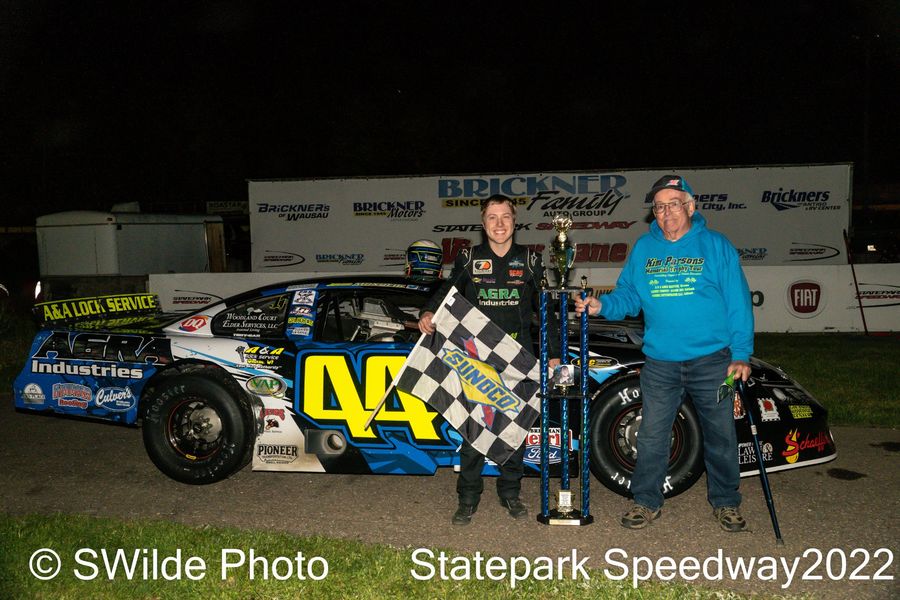 WAUSAU, Wis. (May 21) – It may be a new year, but the opening night of the 2022 season at State Park Speedway was much the same story as 2021 for Justin Mondeik and the rest of the Auto Select Super Late Model class.

Mondeik needed little time to get to the front and breezed to the feature win Saturday night at the Rib Mountain quarter-mile. The 25-year old Gleason native won the 60-lap super late model main in the highlight event among the track’s weekly classes in the speedway’s season opener and the 13th year under operation by the Wimmer family.

The two-time defending champion in the class and a winner of seven of nine weekly show features a year ago, Mondeik led the final 46 laps for his first feature win this season. He finished well ahead of Merrill’s Jason Weinkauf, Mark Mackesy of Wausau and the rest of a spread out field in a race that included just two cautions, including a competition caution halfway through.

Mondeik qualified second-fastest for the night and with a nine-car invert started on the outside of the fourth row, but with the inside row backing up on the start needed just one lap to move into fifth. He then got by Mackesy for fourth on lap 3, and after some contact cleared Wausau’s M.G. Gajewski for third on lap 7.

Mondeik then went to work on Wausau’s Jerry Brickner for the second spot, overtaking him on lap 12. Outside pole sitter Weinkauf led the first 14 laps, but on lap 15 he drifted high in turn 3 and Mondeik scooped underneath quickly to take a lead he would never give back.

Mondeik would be briefly challenged on a pair of restarts, the first at halfway and the second with 21 laps left after a backstretch spin by Louis Goss. Mackesy started on the outside of Mondeik both times, but the leader cleared him quickly on the first restart and on the second needed a lap and a half before getting free of the outside challenge.

Weinkauf also got by Mackesy on lap 41 for second and would hold the spot the rest of the way with Mackesy finishing third. Wausau’s Rayce Haase made the biggest charge in the feature, overcoming issues earlier in the night to move from the 13th starting spot to finish fourth. Fast qualifier Jeremy Lepak of Wausau, who posted a lap of 13.517 seconds in time trials, came on to finish fifth.

A total of 14 super late models took the flag for the feature, including Dillon Mackesy, whose new car suffered considerable damage hitting the turn 3 wall in warmup laps before his heat race. He returned to make one lap in the feature before pulling off the track. Also racing with the SPS super late models for the first time were visiting drivers Cole Thomas of Franklin, Bryan Monday of Appleton and Ryan Kemnetz of Oshkosh, with Monday winning the first heat and Thomas posting the best qualifying effort of the bunch and finishing 10th in the feature.