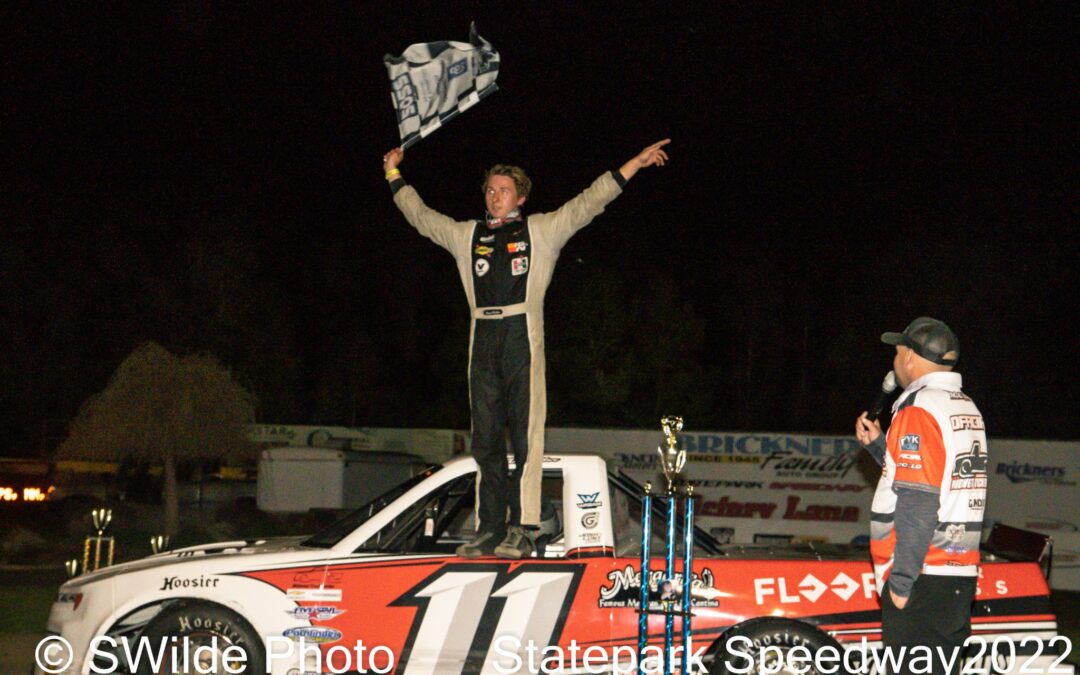 WAUSAU, Wis. (May 21) – Though he’s only raced the track a few times, Bryce Miller has had all the look of a seasoned veteran at State Park Speedway when he has visited with the Midwest Truck Series.

Miller won the trucks’ feature event at State Park for the second straight year, besting a field of 22 trucks to take the Rib Mountain 50. The native of Columbus, Wis., is just the second two-time winner in the Midwest Truck Series’ 14 visits to the track since 2011.

“I really like this place. I’ve got some family up here. It reminds me a lot of a place a grew up going to,” he added, referencing Columbus 151 Speedway, a former quarter-mile like State Park that closed in 2015.

Miller started sixth but quickly moved up to third in the early laps, and then moved to the front row on a lap 7 restart after the race’s first caution when Kevin Zielezinski spun and backed into the wall between turns 3 and 4. Miller started outside early leader Kody Hubred on the restart and quickly cleared him on the way to leading the final 43 laps.

Miller caught lapped traffic by lap 20 and managed it smoothly, keeping Hubred a comfortable distance back while there was also little movement in positions behind the leaders. The race stayed green most of the way until lap 38, when Tyler Noble’s truck stalled between turns 1 and 2 for the race’s second caution.

Hubred had one more chance restarting alongside Miller with 13 laps to go, but Miller quickly cleared him and drove away in the final stages. James Lynch of Palos Park, Ill., also got by Hubred on lap 41 and went on to finish second, with Hubred, Kevin Knuese and James Swan making up the top five after fifth-place finisher and fast qualifier Jeff Holtz was disqualified after failing post-race inspection.

The 14-year old from Wausau inherited the lead on the 15th lap and in the closing laps held off hard-charging veterans Brian Schramm and defending pure stocks champion Mitch Stankowski in just his second career start in the pure stocks at SPS.

Guralski was part of an early three-way battle for the lead along with Stankowski and Jeff Spatz, who started on the front row, took the lead early and led the first 14 laps. Stankowski and Guralski were side-by-side behind the leader, with Guralski trying the outside several times and Stankowski taking a look on the inside on the backstretch on lap 11 before backing out.

Stankowski had another look to the inside on the backstretch on lap 15 before he and Spatz made contact, resulting in Spatz spinning to bring out the race’s first and only caution. Both went to the rear while Guralski took over first, and he would clear Schramm quickly on the restart before Schramm and Stankowski both rallied to hound the leader in the final laps. Guralski would hold on to edge Schramm by a car length with Stankowski one car length back in third.

Willhite got by Dale Louze on the fourth lap and never trailed again. He held off the charges of Joe Kuehn and Chad Ferge to score the victory on the birthdate of his late father Robert, also a former racer at State Park.

Garret Strachota continued a good start to his season with a feature win in the Rockstar Energy Drink Mini Stocks.

Strachota won his second feature in two nights after also taking a win at Golden Sands Speedway on Friday. He passed Joey Blaschka with three laps left and went on to win the 15-lap feature with defending class champion Eric Breitenfeldt second. Blaschka added an SPS-best third-place feature finish after an early side-by-side battle with Brad Lecher for most of the first ten laps.

State Park Speedway returns to its regular night of racing this Thursday for a full program including super late models, pure stocks, mini mods and mini stocks. Qualifying begins at 6 p.m. with racing to follow at 7 p.m.