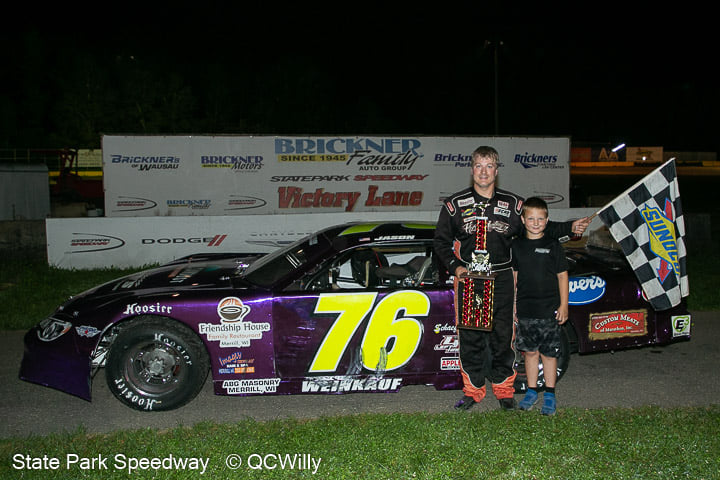 WAUSAU, Wis. (Aug. 19) – A return to weekly racing at State Park Speedway this year for Merrill’s Jason Weinkauf has now brought a payout in the form of one of the biggest wins of the veteran’s racing career.

“It feels awesome. For myself, I’ve been trying to win one of these big three races for a long time,” said Weinkauf after the race, referring to State Park’s three biggest super late model memorial races honoring Lodholz, Larry Detjens and Flip Merwin. “Now we finally did it. Really excited.”

“Wayne was a good friend,” Weinkauf also said about Lodholz, a former late model competitor who passed away in 2009. “Anybody that knew Wayne, the guy would help anybody, he would do anything he could to help a guy out, and how could you not like a guy like that?”

Weinkauf also accomplished something few have been able to do at State Park Speedway in 2021, finally knocking Justin Mondeik from his perch at the top of the class. Weinkauf stopped Mondeik’s string of six straight feature wins and became just the third different feature winner in weekly super late model racing this year.

“I’ve got to give a shout out to the crew. We made a lot of changes to the car (this week), and the car wasn’t bad last week, but we took a chance,” said Weinkauf, who a week earlier had tied his best feature finish of the season coming in second.

Weinkauf took the lead on the restart after an early red flag and then stayed there, safely ahead of fierce racing behind him as well as several spins that on a nearly full-moon night resulted in tempers reaching boiling points.

Weinkauf also showed strength on both the inside and outside, including twice choosing the outside of the front row on restarts. He opted to start on the outside on a lap 46 restart with Dillon Mackesy of Athens inside of him, then again chose the outside with Wausau’s Travis Volm inside him on the final restart with 15 laps left. Both times he cleared his competitors quickly after the green flag was dropped, and he would drive away to win by nearly a straightaway while Volm held off Brock Heinrich of Wausau for second.

Mackesy led the race early, holding the point until lap 13, when the car of Wausau’s M.G. Gajewski started smoking heavily and sprayed oil around nearly the entire track. A lengthy cleanup of more than 15 minutes ensued, long enough for Gajewski to even check over his car and rejoin the race after the red flag.

Weinkauf was running fourth before the caution but moved up to the outside of Mackesy on the restart. He was able to get a good jump on the outside and would clear Mackesy on lap 14, and slowly pulled away with Mackesy fighting off three-time defending Lodi winner Luke Fenhaus for second.

Mackesy would eventually clear Fenhaus and slowly closed in on Weinkauf by the race’s mid-point. Volm and Mark Mackesy also made up the top five at the halfway mark, with Mondeik running sixth after spending the better part of 20 laps trying to find a way around Mark Mackesy.

Mondeik’s situation would get worse on lap 46 when he made contact with Mark Mackesy, who spun on the backstretch, and the result was both drivers went to the rear of the field. Mondeik would work his way back up to fourth before a scheduled competition caution came out with 20 laps left to set up a final sprint to the finish, but he would go to the back again five laps later after contact in turn two caused Dillon Mackesy to spin into the infield and sustain front end damage on his car.

Weinkauf continued to lead the whole time but would face off with Volm in a battle of No. 76 cars on restarts twice in the final 20 laps, including on one final restart with 15 to go.  Weinkauf would quickly clear Volm on both, though, and went on to build a big lead in the final laps. He would go on to win by nearly three seconds over Volm, who battled to his best finish of the season holding off Heinrich in the final laps for second.

Mark Mackesy would finish fourth with Gajewski coming in fifth. Mondeik would get no higher than sixth at the end. Fenhaus set fast time for the evening and was challenging the leaders early but suffered a flat tire from contact shortly after the lap 46 restart. He would finish ninth.