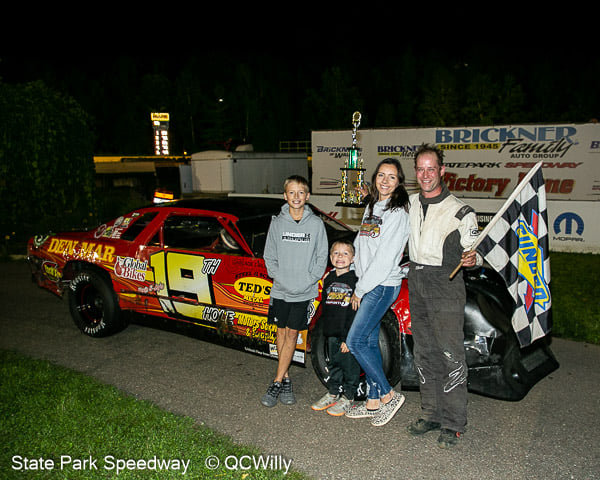 WAUSAU, Wis. (Aug. 12) – Being in position almost all year at State Park Speedway finally paid off with the first feature wins of the season for a trio of drivers.

Mitch Stankowski, Chad Ferge and Cohen Henze all were feature winners for the first time in the 2021 campaign, claiming wins on Corn Night at the speedway. Hunter Landwehr also joined the trio with a dramatic victory for his second feature win of the season on a night that saw clean and largely caution-free feature events in all five State Park racing classes.

Stankowski won his first feature of the season in the Advance Auto Parts Pure Stocks, coming after finishing second on four previous occasions this year. The Wausau asphalt and dirt racer made a pass on the outside before the halfway point and cruised the rest of the way in the 25-lap race.

Stankowski took the lead after a five-lap battle with early leader Justin Woller, who wheeled the No. 01 car driven by Brian Lashua earlier in the season and led eight of the race’s first nine laps. Stankowski took to the outside of Woller on Lap 7 and led at the start-finish line but then briefly slipped back before retaking the lead on Lap 10. He would clear Woller a lap later and from there was off, building nearly a straightaway lead by the end over second-place finisher Alex Volm of Mosinee.

“It feels pretty good, it’s been a long time coming,” said Stankowski after the race in a trackside interview. “The car was pretty good, and I got out there and to be honest I was mirror-driving, but it was a great car and we finally got to the front.”

Ferge had a much tougher drive in the Snap-on Mini Mods, as he had to fight off the charge of six-time feature winner George Seliger of Wausau in the class’s 20-lap feature. The Weston native was able to hold on, though, and scored his first-ever mini mods feature win at State Park.

Ferge got to the front by the fourth lap, overtaking John Lietz of Mosinee for the lead, but Seliger moved into second a lap later and slowly caught the leader. Seliger looked low and high and several times appeared to have an opening on the inside, including for a final time on the backstretch on Lap 19. Ferge was able to shut the door before the drivers entered turn three, though, and he held on for a victory coming after a runner-up finish earlier in the season as well as a number of fast time efforts in qualifying.

The 12-year old native of Juda in the southern part of Wisconsin near Janesville followed up a trio of runner-up finishes earlier in the season by dashing through the field quickly, going from his 10th starting spot to the lead in just three laps. Henze followed Anna Malouf of Rhinelander to the front and then slipped inside Malouf on Lap 3 just after Malouf had taken the lead from Ayden Brockhouse.

Henze would lead the rest of the way, pulling away quickly after three brief yellow flags for spins in the race. He also took over the points lead in the class after defending champion and three-time feature winner Alex Hartwig was not on hand to race Thursday.

Landwehr stood out from other feature winners on the night in that he earned his second win of the season, but also because the Stratford native was involved with Eric Breitenfeldt in the night’s best battle.

Landwehr and Breitenfeldt ran side-by-side for the final 12 laps of the Rockstar Mini Stocks feature, with Breitenfeldt on the inside and Landwehr on the high side. Landwehr made several strong runs on the outside but Breitenfeldt, the class’s point leader and a five-time feature winner this season, held a slim lead at the line on every circuit save for one on Lap 14. He also led as the two took the white flag, but Landwehr was able to get another run on the outside and coming to the checkers he edged ahead at the finish line to win by 15 thousandths of a second.

Brad Abt of Schofield finished close behind the leaders and posted a career-best third-place feature finish. Amanda Rowe of Mosinee also won the mini stocks semi-feature, holding off Joey Blaschka and Kendra Baumann to win the 12-lap race.