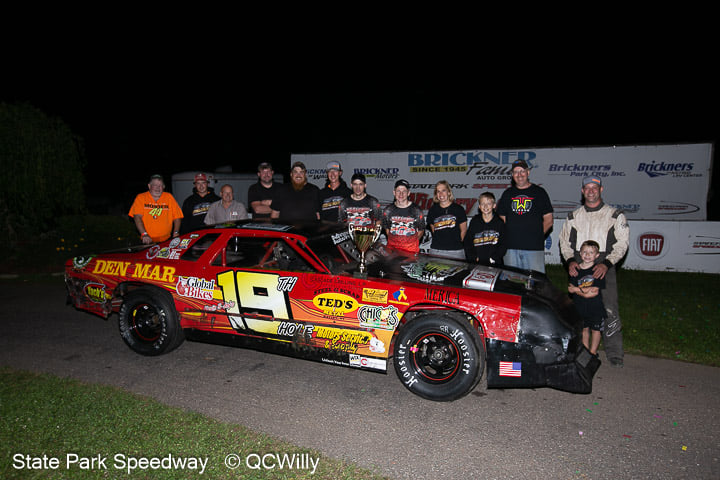 WAUSAU, Wis. (Aug. 26) – Mitch Stankowski was one of the hardest chargers at State Park Speedway all season, but it was consistency that earned him his first-ever track championship at the Rib Mountain quarter-mile.

Stankowski clinched his first Advance Auto Parts Pure Stocks championship with his eighth top-three finish of 2021, finishing second in the final feature race of the season on Season Championship Night at State Park. He finished with 695 points for the season, 34 points ahead of Mosinee’s Alex Volm in the season point standings.

Stankowski finished second or better in a feature for the sixth time this season, coming in behind only Jeff Spatz in the season finale. Spatz led all 20 laps and held off Stankowski and Volm for the final eight laps to pick up his second feature win of the season.

Stankowski finished with just one feature win on the season but was fast every week, setting fast time nine of 10 weeks. The Wausau driver regularly worked from the back of the pack in feature racing to challenge for wins, and also is now in line for a possible championship double. Stankowski currently holds the lead in the IMCA Stock Cars class on the dirt track at Tomahawk Speedway.

Both Volm and Stankowski challenged Spatz for the win on Thursday, and the two ran side-by-side right behind Spatz for most of the final six laps. Volm even had a look to the inside of the leader on the backstretch on the final lap before Spatz closed the door and held on for his second feature win of the season.

Eric Breitenfeldt of Wausau joined Stankowski as a first-time champion at State Park, holding off Garret Strachota in the final point standings by 19 points in the Rockstar Energy Drink Mini Stocks.

Strachota closed the gap on the final night by winning the 20-lap feature Thursday. He passed Tom Lecher on lap 8 and led the rest of the way for his second feature win of the season.

Breitenfeldt needed only to avoid a finish deep in the pack in the 14-car feature, and he stayed in the mix near the front of the field even as he was battled traffic most of the race. Breitenfeldt got as high as fourth hallway through the race before slipping back to fifth, finishing behind Brad Abt with a career-best runner-up finish, Hunter Landwehr finishing third and Tom Lecher in fourth.

George Seliger made it look easy all season in clinching his fourth career Snap-on Mini Mods championship even before the final week of racing. Seliger still returned for the season finale and set a torrid pace again in winning his eighth feature of the season.

Seliger took the top spot from early leader John Lietz of Mosinee on lap 9 and never trailed again in the 20-lap main. While much of the pack jockeyed for position behind him, Seliger took off and finished more than a quarter-lap ahead of Lietz at the finish and half a lap or more ahead of the rest of the field.