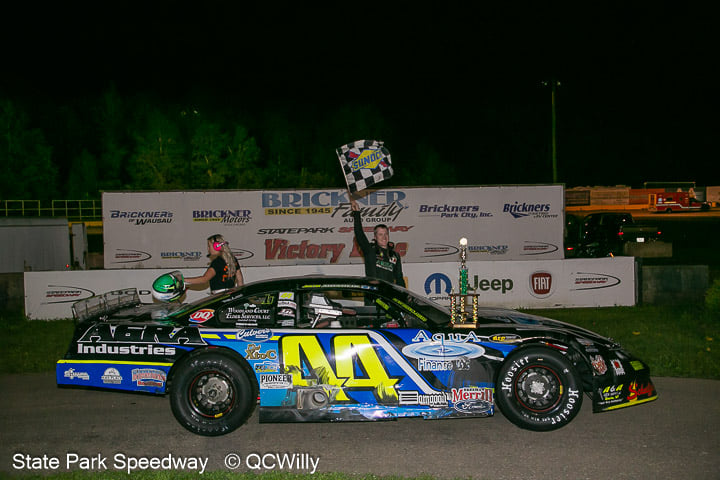 WAUSAU, Wis. (Aug. 12) – There seems to be little that can get in the way of Justin Mondeik’s current roll at State Park Speedway.

Mondeik added on to his winning streak at State Park in the Auto Select Super Late Models, taking the 50-lap main event on Corn Night at the quarter-mile track in Rib Mountain. The Gleason driver won his sixth straight feature in the class, leading the final 34 laps to continue a feature winning streak that dates back to June.

Mondeik started fifth in the feature and needed just four laps to move past Rayce Haase into the top three and four more laps after that to get inside Jason Weinkauf for second. From there he followed Dillon Mackesy, who led from the inside pole until Mondeik began knocking on the door on Lap 15, including several touches from behind.

Mondeik would get to the outside of Mackesy on Lap 17 and would clear him a lap later. The rest was almost academic, with the only challenge coming after a competition caution halfway through. Weinkauf would line up alongside Mondeik after Mackesy chose to start behind the leader, but after one side-by-side lap Mondeik would clear Weinkauf and eliminate any suspense, leading comfortably the rest of the way.

With his six feature wins, Mondeik has been even hotter than a year ago, when he won three features in weekly racing as well as the ARCA Midwest Tour and TUNDRA events at State Park.

“Yeah we’ve been pretty good here these last few weeks,” said Mondeik in a post-race trackside interview. “We’ve never been giving up, we’re trying to find more and more speed every time we come back here, we’re always aggressive and I think that’s really been the difference.

“Last year we were pretty good here, and I never wanted to venture away from our main setup because it was so good, but everybody else started catching up and this year I said we’re going to be aggressive. Some nights you win and sometimes you don’t, but a very aggressive nature it seems like has been working out pretty good.”