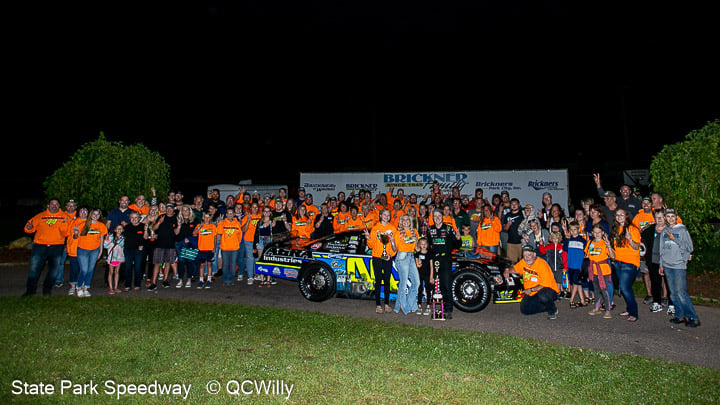 Mondeik finished with a sweep of the final night of racing at the track, setting fast time, winning the fast heat and then taking the 60-lap feature in the Auto Select Super Late Models presented by C-Tech on Season Championship Night.

Mondeik capped a briskly run full race program that concluded in less than two hours to beat incoming weather, taking the lead from Jason Weinkauf on lap 40 and leading the rest of the way. The Gleason driver won his seventh feature of the season at the track and finished 96 points ahead of runner-up Weinkauf in the final season point standings.

Mondeik came from the eighth starting spot on Thursday and had to be patient, as he was locked in a battle with Dillon Mackesy for nearly 10 laps early on before taking over the fourth spot. He later had to fight to get back the second position he initially moved into by lap 21, choosing to start on the inside of the second row on a pair of mid-race restarts after cautions and falling back to third briefly before rallying back.

Mondeik moved back into second on lap 32 after muscling inside of Travis Volm on the front stretch. Weinkauf, who a week prior won the Wayne ‘Lodi’ Lodholz Memorial at State Park, held an eight car length lead at that point, but the margin evaporated within five laps.

Mondeik looked inside of Weinkauf for three laps before taking to the outside on lap 40 to take the lead. He would cruise from there, finishing 1.387 seconds ahead of Weinkauf at the finish.

Weinkauf finished second after leading 25 laps, taking over first on lap 15 from early leader M.G. Gajewski, who started on the outside of the front row and led the first 14 laps. Volm held off Rayce Haase for third, as the two dueled for position for the final 15 laps. Mark Mackesy rounded out the top five.