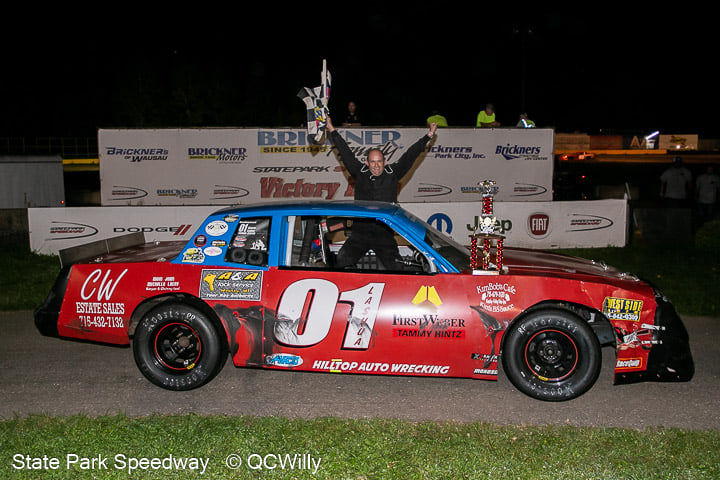 WAUSAU, Wis. (Aug. 19) – Dave Lashua is still remembered fondly by many at State Park Speedway five years after his untimely death, and fans of the late pure stock driver have received even more reminders of him in recent weeks.

Lashua’s old No. 01 car has been back on the track again this year, first driven by his brother Brian Lashua and the last two weeks by guest drivers. The car has performed well, too, and this week it returned to feature-winning form as Dave Cabelka of Wausau stepped into the 01 and won the 25-lap Advance Auto Parts Pure Stocks feature as part of the Wayne ‘Lodi’ Lodholz Memorial.

Cabelka led all 25 laps of the feature but had to fight off a pair of challengers late as Mitch Stankowski and Brian Schramm both closed in. He held to win his first feature of the season and became the sixth different feature winner in the class this year.

“It’s a great feeling, I was friends with Dave, with his family, he actually was in the stall next to mine for many years,” said Cabelka after the race in Brickner Family Auto Group Victory Lane. “So it’s great to win this, on ‘Lodi’ night first, but also for Dave.”

Cabelka started on the inside of the front row and after an early side-by-side battle with Brett Breitenfeldt was able to built a comfortable lead while the pack jockeyed for position behind him. Stankowski would get by Jeff Spatz on the outside for second on lap 14, though, and Cabelka soon had company with last week’s feature winner on his tail.

“I felt him and saw him in the mirror,” Cabelka said with a smile after. “I knew if I didn’t give up the bottom I could possibly win it because it’s tricky on the outside, especially late in the race, so I just hung on the bottom the last five laps and it worked out.”

Hunter Landwehr of Stratford continued an impressive late-season run in the Rockstar Mini Stocks, overtaking defending class champion Garret Strachota to win his third feature of the season and third in less than a month at State Park.

Landwehr and Strachota waged a side-by-side battle for most of the second half of the 20-lap feature, with Strachota holding the inside but Landwehr hanging tough on the outside. Landwehr led by inches on the outside with three laps left when an incident followed shortly after with Wausau’s Zach Budleski spinning and hitting the outside wall on the backstretch after contact with Brad Lecher.

Strong in the outside groove in recent weeks, Landwehr still chose the inside groove for the restart with Strachota starting to hit outside. Strachota would get a good start when the green flag dropped, but Landwehr surged back on the inside, cleared Strachota and went on to win with Strachota second, Ashley Schoone of Gleason third and points leader Eric Breitenfeldt fourth. Breitenfeldt finished the night still with a 38-point lead over Strachota in the standings heading into the final race next week.

Wausau’s George Seliger put on another dominant performance in the Snap-on Mini Mods in winning his seventh feature of the season.

Seliger took the lead from Mosinee’s John Lietz on the eighth lap and never looked back, finishing a straightaway ahead of last week’s feature winner Chad Ferge. Seliger also clinched the mini mods season championship, wrapping up his fourth championship in the class with one week of racing remaining.

Cohen Henze closed out a championship season as strong as could be in the E.H. Wolf & Sons Bandoleros. The 12-year old from Juda, Wis., scored a clean sweep of the night, setting fast time for the first time this season, winning his heat and then taking the 15-lap feature race.

Henze wrapped up his first track championship in style, driving to the front quickly in the feature from his 10th starting spot. He overtook Collin Murphy of Janesville for second on lap 3 and then passed West Salem’s Bentley Thompson for the lead in turn one on the fourth circuit. He cruised the rest of the way for his second straight feature win. Murphy finished second for his best career feature finish at SPS while Penn Sauter of De Forest was third.

State Park Speedway closes out its weekly racing schedule for the season next week with season championship night for the super late models, pure stocks, mini mods and mini stocks. Jim Kryshak Jewelers also will sponsor Sparkling at the Speedway, and it also will be Fighting Cancer Full Throttle night. Fred Mueller Qualifying begins at 6 p.m. and racing follows at 7 p.m.