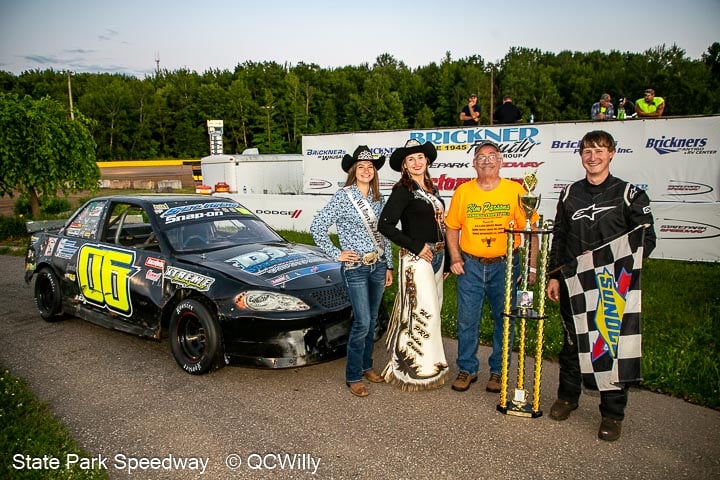 WAUSAU, Wis. (July 15) – In the Advance Auto Parts Pure Stocks, Mitch Stankowski was quickest in qualifying at 15.411. Jeff Spatz, after late race contact and Dave Cabelka would win in the heat races.

The feature saw some wild and crazy action, fitting with the annual theme of Shark Week. Jeff Spatz led the first 5 laps until Stankowski made his was to the front and contact would send both to the rear after the caution. At that point Alex Volm assumed the lead. The craziness certainly wasn’t done there though, as later into the race with 11 laps remaining, contact with Brian Plisch and Cabelka would hook the cars and send them toward the back stretch wall. Cabelka, on the outside was pushed up onto his side, and then on top of the wall, perfectly balanced. After a lengthy clean up and claw-game like retrieval of Cabelka’s car, the race would be decided on restarts. Volm and Brian Schramm would be on the front row with Volm prevailing and picking up another feature victory. Schramm would finish 2nd, with Mark Kalata 3rd, Brett Breitenfeldt 4th and Spatz 5th. “I checked my mirrors a few times and was able to avoid those cautions early” recalled Volm after the win. “I can’t thank my crew enough, even though they are all at Rock Fest right now.”

The Snap-on Mini Mods qualifying session ended with the top two cars tied at 15.857. George Seliger turned that lap in session 1 while Chad Ferge was in session 2 so Seliger got the fast time honors. Heat races were won by Dale Louze and Kevin Tessmer, after Seliger appeared to have some car issues and faded on the final lap of the heat.

The feature started out like most any other Mini Mod features this year, side by side racing all the way through the field. The major difference this time was who the leaders was, and that was Keagen Benz. Benz led the first few laps until Louze took the outside to make the pass. Once he did, the outside lane moved their way to the top of the board. Seliger was able to clear traffic on the high side shortly after and would cruise home with another feature victory. “Patience is always key. Things will work themselves out” claimed Seliger when asked if he was getting anxious early in the event. Ferge, Joe Kuehn, Jim Lietz and Louze would take home top 5 finishes.

The Rockstar Energy Drink Mini Stocks saw a new fast time qualifier in town when Chris Boykins took the honors with a 16.582. Luke Mikula, Branden Sischo and Eric Breitenfeldt all took wins in the heats. The Semi-Feature, to advance two cars to the Feature wound up being dominated by Sischo and Ashley Schoone would transfer on her 2nd place finish.

In feature action, Travis Lang and Brad Lecher brought the field to one of the craziest green flag starts of the night. Cars darted all over the speedway. Early in the race, big contact with Brad Abt and Lang almost caused a large wreck, but everyone was able to continue. Soon enough, the usual contenders found their way to the front in Breitenfeldt and Garret Strachota. Strachota tried pretty much every move in the books, but just could not get past Breitenfeldt. On the white flag lap, contact would cause a yellow-checkered finish when Clayton Phillips and Boykins tangled in turn 1 after contact cut down Phillips’ right front tire. All other cars avoided extra damage. The leaders took the checkered flag shortly after the incident and Breitenfeldt would be victorious over Strachota once again. Tom Lecher, Abt and Hunter Landwehr rounded out a hotly contested top 5. In victory lane, Breitenfeldt stated “My goal was to win 1 Kim Parson’s Memorial trophy this year, and now this makes 4.” Proof that a very successful year may just continue for him in 2021.