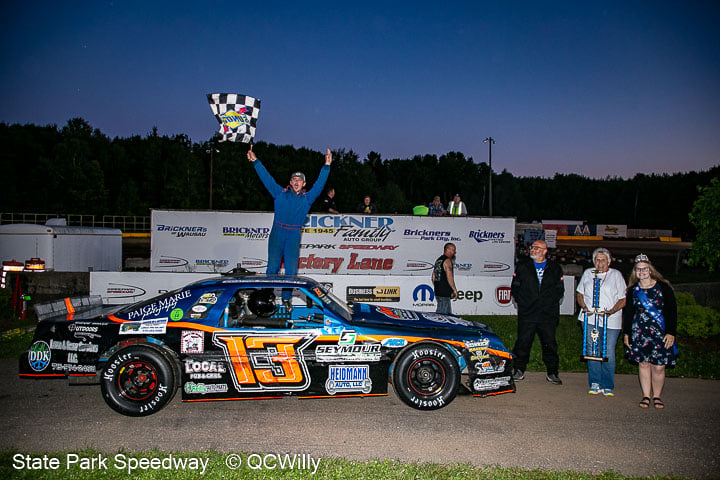 WAUSAU, Wis. (July 1) – The Dave Lashua Memorial at State Park Speedway continues to bring out the best in Alex Volm.

One of the biggest races of the season in the Advance Auto Parts Pure Stocks class went to Volm once again, as he took the lead from Jeff Spatz coming to the white flag after nine laps of hard work and went on to win the race in honor of Lashua for the third straight year. The Mosinee driver also claimed his second feature win of the season and took home an extra $500 for the winner awarded by Brock Heinrich Racing in honor of the race’s late namesake.

The race remembering a former Wausau driver best remembered for his years in the pure stocks saw drivers honor his memory by putting on a show Thursday night, with the door-to-door racing that makes the class a fan favorite and a three-way fight for the top spot in the final laps.

Spatz and Volm raced side-by-side for almost the entirety of the final 10 laps after Volm took to the outside of the leader on lap 16. Spatz held the lead at the start-finish line every time from lap 16 through 23, often by inches and never by more than a fender.

Mitch Stankowski also lurked right on the back bumper of Spatz in the closing laps, and even had multiple looks to the inside of Spatz on the backstretch with the chance to make it three-wide. The final one came on lap 24, and the two made slight contact, enough to get Spatz loose and to allow Volm to drive to the lead on the outside. Volm would go on to win by three car lengths over Stankowski, with visiting driver Dave Trute of New Lisbon also getting by Spatz on the final lap to take third.

“It means the entire world,” said Volm after the race. “I look forward to this race every year, the Lashua family is amazing…I got super emotional coming to the checkered flag, it feels amazing.”

The win continued the Volm family stranglehold on the Lashua Memorial. In addition to Alex Volm’s string of three straight wins, cousin Travis Volm also won the first two runnings of the race in 2017 and 2018.

Fast qualifiers for the night found their way to the front in features in other classes too, including George Seliger of Wausau, who stayed hot in the Snap-on Mini Mods and won his third feature of the season and third straight in the class.

Winner of three straight championships in the class from 2016-18, Seliger showed some of that dominant form all night, first setting fast time for the first time this season and then patiently working through the field from his 11th starting position to take the feature.

The field ran mostly double-file for the first ten laps with first Dale Louze and then Kevin Tessmer holding the lead, but once traffic broke up Seliger took to the high side to make his move for the lead, going from sixth to first in a stretch of three laps. Seliger overtook Jim Lietz for second on lap 13 and was outside leader Kevin Tessmer one lap later, leading lap 14 and clearing him on the next circuit. Seliger sailed away from there, finishing a full straightaway ahead of runner-up Tessmer at the finish.

The trend of dominant feature winners in most of SPS’s weekly classes so far this season carried into the Rockstar Energy Drink Mini Stocks, where Eric Breitenfeldt of Wausau won his fourth feature in five weeks of racing.

Breitenfeldt took the lead from Ashley Schoone of Gleason on the 12th lap, coming out on top of a three-car battle that also included defending class champion Garret Strachota. While Schoone was fighting off several attempts by Strachota to get by on the inside, Breitenfeldt took to the outside and completed a charge from the 12th starting spot after also setting fast time for the first time this season. Strachota finished second with Schoone taking third after holding off Wausau’s Chris Boykins in the final laps.

Makayla Last of Wausau won the mini stocks semi-feature, leading all 12 laps for her first-ever semi-feature win. Joey Blaschka of Wausau held off Mosinee’s Amanda Rowe for second, with the top two finishers advancing to the feature.

State Park Speedway will take a break from racing next week with no race show. Racing resumes in two weeks with Women Concerned for Auto Racing (WCAR) Gifts From Heaven Night. The super late models will lead a full show also including pure stocks, mini mods and mini stocks. Fred Mueller Qualifying begins at 6 p.m. with racing to follow at 7 p.m.