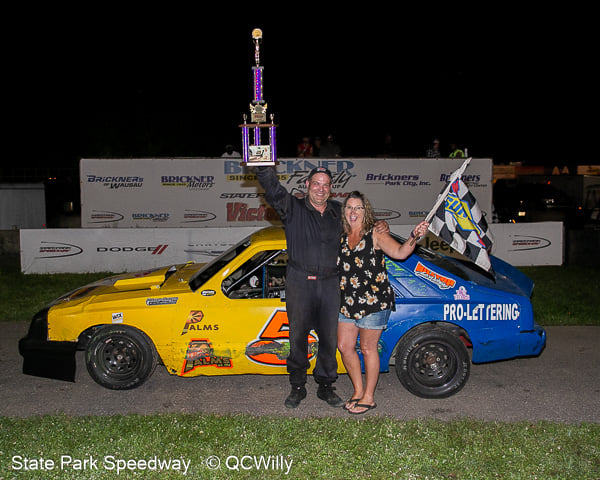 WAUSAU, Wis. (July 24) – Kevin Tessmer and Evan Call raced side-by-side for almost all of 25 laps in the Snap-on Mini Mods feature Saturday night at State Park Speedway, and looked like they could’ve done the same for 25 laps more.

Twenty-five laps was more than enough for Tessmer on multiple fronts, though, as the Wausau driver picked up his second career mini mods feature win as part of the 41st annual Larry Detjens Memorial at State Park. After trading the lead at the start-finish line nine times in the race, Tessmer finally cleared Call on the last lap for his first feature win of the season.

“My god, he was tough,” said Tessmer after the race in Brickner Family Auto Group Victory Lane. “I give these ARCA (Midwest Tour) guys a lot of credit for racing 125 laps, I’m tuckered out after this.

“When you get up front you’re just waiting for something to happen, to open up…I won a Detjens Trophy.”

Tessmer took the lead for good on Lap 19, but often by little more than inches at the line. He then won a final four-lap shootout after a late caution, holding off a bunch of heavy hitters behind the top two.

Tessmer started on the inside pole and took the lead from Keagen Benz on the first lap, then had Call lined up next to him on restart two laps later after Kole Ferge and Chad Ferge spun in turn one on the third circuit.

Tessmer and Call were side-by-side virtually the entire race, with the other fighting back every time one appeared ready to get free. Tessmer led through Lap 7 before Call battled back to lead Lap 8, and the two swapped the lead for four laps before Tessmer edged ahead and appeared ready to pull away.

The most breathing room between the two came on the last lap, as third-place running Shawn Kemnetz of Hancock briefly got sideways and slid into Call in turns one and two. Tessmer would get away and would beat Call to the finish by two car lengths, with Kemnetz saving his car and holding off two-time defending mini mods champion Greg Blount of Marathon for fourth. Wausau’s George Seliger, who had won the previous five features in the class, was caught near the back of the pack of six cars that ran together for the final 15 laps and finished fifth.

Ashley Schoone of Gleason was another to take a hard-earned feature win on the second night of the Detjens Memorial. She also held off a strong field behind her to take the 25-lap Rockstar Energy Drink Mini Stocks main event.

Schoone won her first feature of the season and a feature on Detjens Memorial weekend for the second straight year. She led all 25 laps but it was hardly a breeze, especially as she held off repeated challenges over the last 11 laps by Wausau’s Eric Breitenfeldt.

Breitenfeldt looked high and low for an opening, and contact on lap 17 even resulted in both cars going into the inside corner dirt between turns three and four. Schoone straightened her car out to hold the lead and led the rest of the way, including on the last lap when Breitenfeldt tried high one more time out of turn two. Schoone finished just over a car length ahead at the finish with Wausau’s Garret Strachota third, Jake Halterman of Stanley coming in fourth and Chris Boykins of Wausau holding off Friday night feature winner Hunter Landwehr of Stratford for fifth.

The New Lisbon, Wis., native who is a regular at Dells Raceway Park shot past Jeff Spatz on the inside for the lead on Lap 9. He was never challenged again in the 25-lap race, finishing nearly a full straightaway ahead of Spatz with Mitch Stankowski taking third.

Alex Hartwig of Portage extended his winning streak in the E.H. Wolf and Sons Bandoleros with his third feature win of the season and his eighth straight at State Park dating back to last season.

Hartwig drove inside Avery LInnerud of Milton for the lead on Lap 8 and cruised the rest of the way to the win. He completed a clean sweep of the night that also included fast time honors and a heat win, with Juda’s Cohen Henze coming in second in the feature and Linnerud finishing a career-best third.

State Park Speedway returns to its regular weekly Thursday night racing schedule this coming week, July 29th, with Christmas in July Night. It also will be Wausau Noon Optimists Club Kids Night, rescheduled from earlier in the season, and will include bicycle races for kids. Fred Mueller Qualifying begins at 6 p.m. and racing follows at 7 p.m.