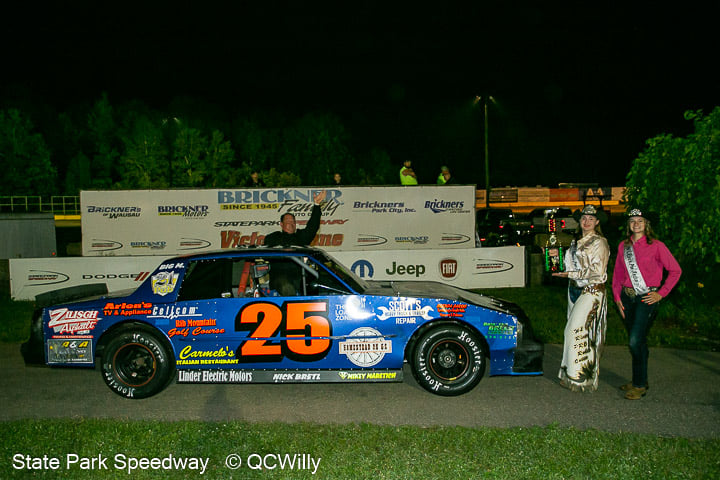 WAUSAU, Wis. (July 29) – Christmas in July at State Park Speedway provided Wausau’s Brian Schramm a present of its own, and the veteran driver knew just what to do with it.

Schramm assumed the top spot in the Advance Auto Parts Pure Stock feature Thursday after the top two cars were involved in a spin racing for the lead. The three-time defending class champion rolled from there, winning his second feature of the season on Wausau Noon Optimists Club Kids Night and Christmas in July Night at the 1/4-mile speedway.

Schramm was running third on Lap 15 behind Jeff Spatz and charging Mitch Stankowski in second when Stankowski made contact with the leader, spinning Spatz on the front stretch. Both drivers were sent to the back of the field, giving Schramm first place, and he drove away after the restart to win the 20-lap race.

Schramm started fifth and made a slow climb to the front while Spatz and Brett Breitenfeldt raced for the lead early, with Breitenfeldt leading the first two laps on the outside of the front row before Spatz took the lead and soon drove away. Schramm passed Breitenfeldt for third on Lap 6 but fell back a spot after fast qualifier Stankowski got by him shortly after.

Stankowski trailed Spatz by eight car lengths at the midway point but quickly cut that margin in half in three laps, while Schramm moved back into third on Lap 10 passing Brian Plisch. Stankowski reached Spatz’s bumper two laps later but got too much of his bumper soon after, resulting in the race’s only caution. Stankowski would rebound to come back to finish second while Mosinee’s Alex Volm finished third.

A race night that hit a foul note earlier on for Wausau’s George Seliger turned to turned to roses later on, as Seliger bounced back from a heat race accident to win his sixth Snap-on Mini Mods feature of the season.

Seliger was racing Joe Kuehn for the lead in the second heat race when the two cars made contact going into turn three, causing Kuehn to spin hard into the outside wall tires and Seliger to slip up into the outside wall as well. Both cars received significant damage, including Seliger driving off with a mangled right rear wheel.

Both drivers and their crews hustled to repair their cars for the 20-lap feature, and Seliger needed just two laps to drive from his sixth starting spot to the lead. With the inside lane slow early he moved to third on the first lap and passed both John Lietz for second and then Kole Ferge for the lead on the second lap and led the rest of the way, including driving away after a Lap 15 restart. Shawn Kemnetz of Hancock finished second and Jim Lietz of Mosinee came in third.

Defending Rockstar Energy Drink Mini Stocks champion Garret Strachota has knocked on the door of a feature win all season and finally broke through for his victory of the year.

Six times a runner-up in feature races this year, Strachota won for the first time after taking the lead just past the midway point of the 20-lap event. He assumed the top spot after leader Branden Sischo of Stratford drifted high out of turn four on Lap 11, and Strachota held off five-time feature winner Eric Breitenfeldt of Wausau.

Joey Blaschka of Wausau also won the mini stocks semi-feature, his first-ever semi win. He held off Amanda Rowe of Mosinee to win the 12-lap race, and the top two finishers both advanced to race in the feature.

State Park Speedway’s weekly classes are off next week as there will be no regular Thursday night show. Racing does return to the speedway next Saturday, Aug. 7 when the TUNDRA Super Late Model series visits. Fan gates open at 4:30 p.m. with Fred Mueller Qualifying at 5:45 p.m. and racing to follow at 7 p.m.