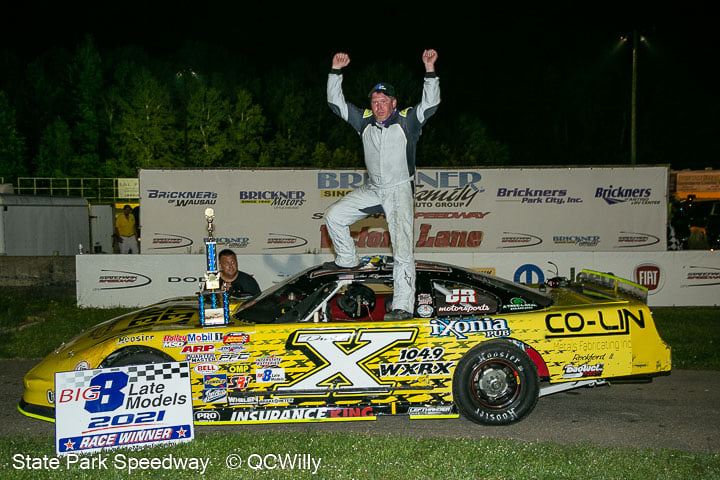 The pilot of the Driver X car passed fellow Rockford, Ill., area driver Mike Beyer on the inside on Lap 35 and held the point the rest of the way for also his second Big 8 win of the tour’s eight-race 2021 season. He held off a charging Grant Brown of Prior Lake, Minn., in the final laps to win by four car lengths, also winning his 14th career Big 8 feature, second-most all-time in the series’ history behind only Michael Bilderback (16 wins).

“I love this place. It’s so fun to race here, you’ve just got to have some time,” said Reynolds of the 1/4-mile track after the race in Brickner Family Auto Group Victory Lane. “I know the 14 (Brown) was coming, but as long as I had a 3-4 car length lead, I knew he just didn’t have enough corners to get me.”

Reynolds started ninth in a field of 14 cars but was in the top five by Lap 5 while Mike Lloyd of Davis, Ill., led early. He took fourth on Lap 11 and was in third four laps later after getting by Richfield’s Jerry Mueller.

Lloyd would lead the first 11 laps until Beyer, making his second Big 8 start of the season, took to his outside on Lap 12. The two would run side-by-side for three laps until Beyer took the lead on Lap 15 and cleared him a lap later.

Reynolds would also get by Lloyd on Lap 19, but by then Beyer had built a 10-car length lead. Reynolds would slowly reel in Beyer over the next 15 laps and took the lead when Beyer drifted high on the 34th circuit.

Reynolds was in the clear the rest of the way, though Brown made a run through the field and closed in late. The night’s fastest qualifier and also joining Reynolds as a heat winner, Brown started 10th made a slick three-wide pass on the inside on Lap 24 to move into third, then passed Beyer for second on Lap 45. He was still eight car lengths behind Reynolds at that point and cut that margin in half over the final 13 laps but finished second for his best-ever Big 8 feature finish.

“I’d like to think so,” said Brown after the race when asked if he thought he could’ve caught Reynolds with a few more laps. “With 10 laps you never know (but) we were really confident about our car…I think we would’ve been able to track him down; whether we would’ve passed him clean is another matter.”

Nick Egan of Lomira came on to finish third while Michael Beamish of Eagan, Minn., finished fourth, with both passing Beyer in the final laps. Beyer finished fifth, and in all 10 of 14 cars finished on the lead lap and 13 were running at the finish.