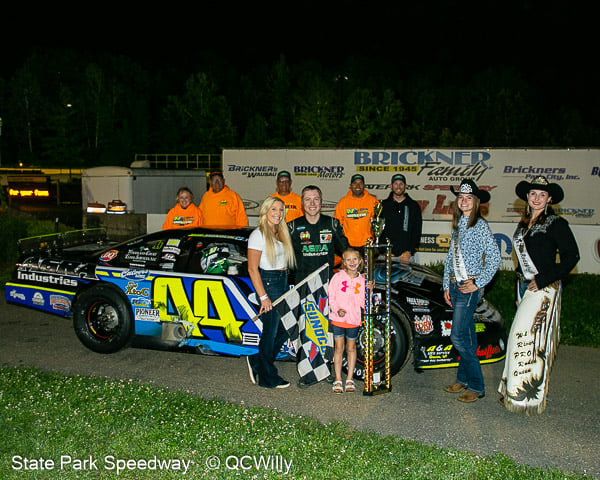 WAUSAU, Wis. (July 15) – The Auto Select Super Late Models presented by C-Tech were represented by Justin Mondeik taking quick time honors with a lap of 13.931. Two wild heat races would end up with Mark Mackesy winning heat one, where Levon Van Der Geest and MG Gajewski came together which cause some damage to the Gajewski car. Heat 2 saw even more damage when Rayce Haase and Jason Weinkauf would make contact in turn 3 in front of the whole field and caused damage to each of their cars. The worst damage though was suffered by Brock Heinrich who ended up hard into the turn 3 wall trying to avoid the spinning cars. That damage would end Heinrich’s night prematurely.

In the feature, Jason Weinkauf was able to lead the opening laps until Justin Mondeik was able to make the pass about 9 laps in. Mondeik would be on cruise control most of the rest of the event. Behind him, spots were being sorted out as every car was very close in speed and times in qualifying. With 23 to go, yellow would fly when Van Der Geest and Haase made contact. Later in the race, with 5 laps to go, Haase and Mark Mackesy would make contact to bring out another caution. This set up a shootout up front, but Mondeik was able to fend off Gajewski and pick up yet another feature victory. “I feel like our team is now hitting on all 8 cylinders, and it feels really good” Mondeik stated in victory lane. “Thanks to my dad, he can get the car changed over and ready for a race at Norway tomorrow.” Gajewski would hold on for a 2nd place finish with Weinkauf, Mark Mackesy and Dillon Mackesy all finishing top 5.

MUST register for Kids' Bike Races by 7pm1