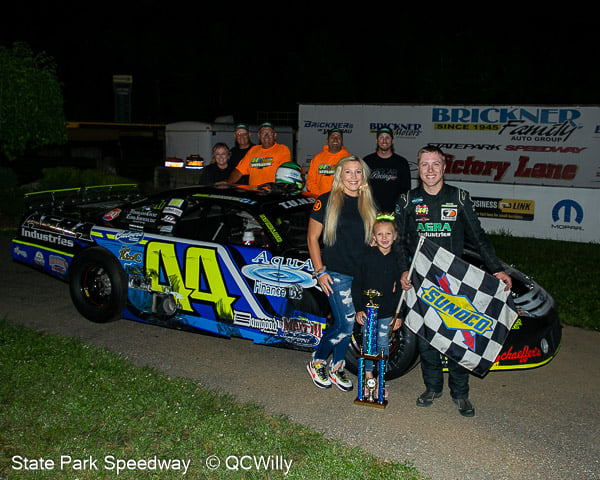 WAUSAU, Wis. (July 1) – The duel for supremacy at State Park Speedway between Justin Mondeik and Brock Heinrich added another battle Thursday night, and score another win for the defending champion.

Mondeik won his third straight feature this season in the Auto Select Super Late Models presented by C-Tech, getting by Heinrich late and prevailing in the 60-lap feature for the Dave Lashua Memorial and Fireworks Night on a gorgeous Thursday finally unaffected by rain at the quarter-mile track.

The Gleason driver took advantage of a slight wiggle off the second turn on lap 50 to get a nose inside the leader Heinrich on the backstretch. Mondeik kept a fender inside going into the third turn and the two made contact, with Heinrich slipping up enough for Mondeik to edge ahead.

The two traded paint for the next 1 1/2 laps before Mondeik cleared him, and Heinrich was unable to challenge again. Mondeik would go on to win by four car lengths, with Heinrich finishing second to Mondeik for the second straight week.

“We knew with about 20 (laps) to go it was time to go,” said Mondeik. “It seemed like he was getting a little bit tight, we were gaining a little bit out of (turns) one and two, and we were able to get a nose underneath him off of two. I felt like we were up to his numbers going down the backstretch and it was just tight coming into turn three.

“It was just a racing deal, they’d do the same thing for the win. We’ve got a lot of respect for those guys, it’s been fun racing with them all year.”

Heinrich has emerged as arguably Mondeik’s toughest competition over the last year at State Park, and the two ran 1-2 for the final 42 laps, just after the Wausau native took the top spot from Gabe Sommers on lap 17. Mondeik followed him into second a lap later, and the two would stay that way for more than 30 laps before their late showdown.