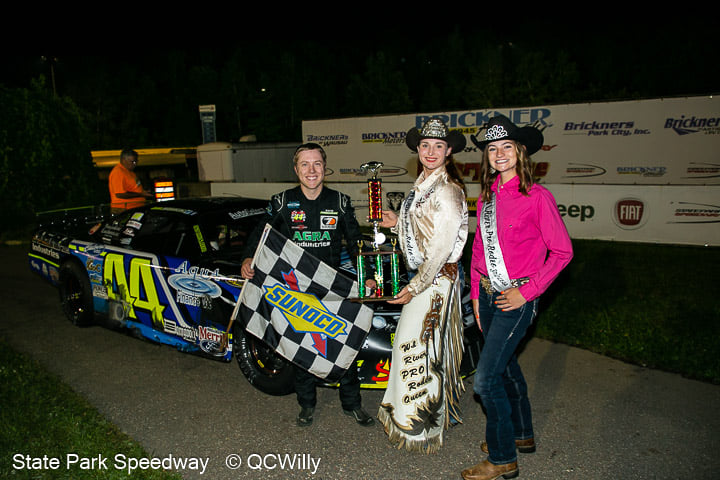 WAUSAU, Wis. (July 29) – A start further back in the pack proved no problem for Justin Mondeik to continue his winning streak at State Park Speedway.

Mondeik started ninth in the field and slowly made his way near the front, then darted to the lead midway through the race.

Mondeik’s big break came when running third with Wausau drivers M.G. Gajewski and Brock Heinrich racing for the lead on Lap 29. Gajewski was leading and Heinrich was in second when the two got together, with Gajewski getting loose and Heinrich having to back off.

Mondeik took advantage to drive to the outside of both on Lap 30, and he led Gajewski by half a car length when he also received some help with a lapped car on the inside allowing him to clear Gajewski. He would cruise from there, building a full straightaway lead and able to back off considerably to save the car the rest of the way as he won his ninth feature race of the season at Wisconsin and upper Michigan tracks.

The race’s biggest battle the rest of the way came for second, with Gajewski fighting off Heinrich for a time before Heinrich slipped up on the outside after contact with Gajewski again. Dillon Mackesy of Athens later got his chance and would pass Gajewski for second on Lap 37.

Gajewski would hold on to finish third with Travis Volm close behind in fourth. Jordan Thiel finished fifth with a strong car in his first appearance at the track this season, as the Appleton area driver prepared for the upcoming TUNDRA race next week at State Park and won the second heat race.

Gajewski led the first 29 laps of the caution-free race, starting on the inside pole and first building a lead, then holding off Heinrich and Mondeik after the two moved into second and third, respectively, on Lap 15. Heinrich appeared poised to challenge for the top spot before contact with the leader.

Heinrich would slip back to sixth at the finish with Mark Mackesy coming in seventh after also challenging for a top-four finish late. The race also marked the return to racing of Mike Cox Jr., a former late model feature winner at State Park and a strong contender on the Central Wisconsin Racing Association circuit who retired from racing in 1999 and was back on the track for the first time in 22 years.