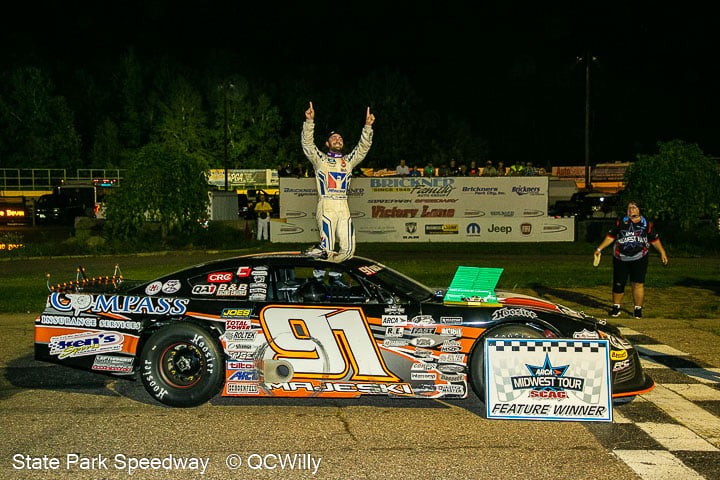 State Park Speedway holds a special place in Ty Majeski’s racing career. It was 10 years ago he won his first Midwest Truck Series race. 10 years later he would hold off defending winner Justin Mondeik to win the Larry Detjens Memorial 125, his third victory in four starts this season in the ARCA Midwest Tour.

“We really had speed, but we adjusted on it a lot today,” a smiling Majeski said in victory lane. “The crew worked their tail off. We were a little short handed and we were thrashing on this thing, using all of the time up on it to get this thing right.

The four-time Tour champion was fast all day, He would win the fast qualifier award with a time of 13.500 seconds, and would roll a four for an eleven car invert for the main event.

Mondeik qualified 11th and would start on the pole for the main event. The defending winner would take the early lead over Chris Weinkauf.

While Mondeik led the field, Majeski quickly worked his way into the top five by lap 18. Eight laps later, Majeski would get by Weinkauf for the second spot.

Mondiek had a 2.301 second lead over Majeski until the first of two cautions flew on lap 30 when Jeremy Lepak and Levon Van Der Geest got together in turn three.

On the restart, Majeski started on the inside of Mondeik and the two would pull away from the rest of the field.

The two would be nose-to-tail with Majeski taking a peak inside from time to time.

The final caution flew on lap 54 when Travis Volm spun and backed his car into the turn two wall. ARCAMT officials discovered that Rich Bickle Jr. was leaking fluid. Bickle would go to the pits and would get his car repaired to join the field after a red flag to clean up the track.

The final restart was on lap 55 where Majeski chose to start on the outside of the front row alongside Mondeik.

It only took a lap for Majeski to get a good bite off of turn two and get ahead of Mondeik for the lead.

Mondeik would try to challenge a few times, but Majeski was too strong in the late going as he pulled away to add his name to a long list of winners of the Larry Detjens Memorial.

“Obviously the 44 (Mondeik) has a real good package here,” Majeski commented. “He made it tough on me and that was about as hard of a 70-lap run that I had to make and it was a lot of fun. He definitely pushed me there.”

Mondeik was hoping to be a back-to-back winner of the famed event.

“We had a pretty good car and it went away for us a little bit at the end,” Mondeik said after the race. “On the short run, he was better than us and that is where we were bad. We were about pretty even on the long run.

“Man it just sucks, it would have been awesome to go back-to-back, I definitely hate losing, but of all the people I don’t mind getting beat by, its Ty. It was awesome to be that close, but it just sucks.”

“We had a real solid run, the car was way better than last year,” Johnson said. “We made huge gains from that. The boys worked real hard all week and I really can’t complain.”

Dalton Zehr and Luke Fenhaus put on a spirited side-by-side battle for fourth, with Zehr taking the position at the finish.

In earlier action, Paul Shafer Jr. wins the odd dash while Bickle held off Levon Van Der Geest to grab the checkers in the even heat.

The Stars and Cars of the ARCA Midwest Tour will be back in action on Tuesday, August 3rd for the Gandrud Auto Group 250 at Wisconsin International Raceway in Buchanan, Wisconsin.