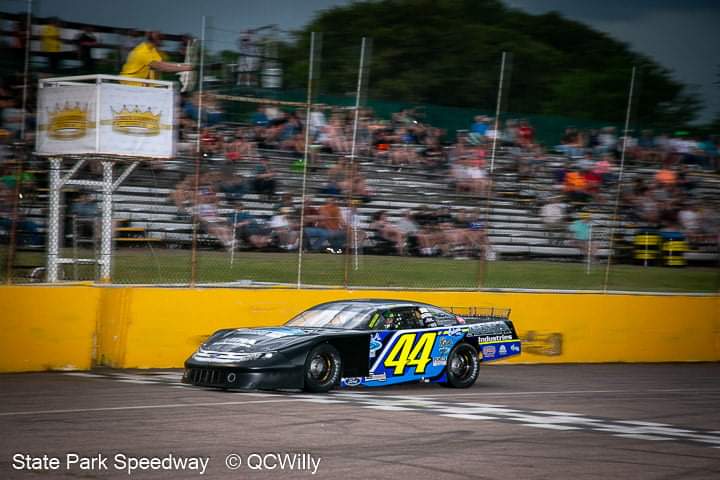 WAUSAU, Wis. (June 10) – Weather was an unwelcome factor once again at State Park Speedway Thursday night, this time scoring its most decisive blow yet on a race program this season.

Just one race was completed before a storm front blew in around 7:30 p.m. and persistent light rains followed for the rest of the evening, causing the cancellation of racing for the night. It marked the third consecutive race night of the 2021 season to be altered by rain and the second to have events canceled and moved to the following week.

The lone race to be finished after Fred Mueller Qualifying was the Auto Select Super Late Model feature, the first of feature races across four divisions which were moved up in the program in the attempt to complete each class’s main events. The night’s lone winner was Justin Mondeik, the track’s defending super late model champion who won the 60-lap super late model feature.

Mondeik started third in the feature and moved into the top spot on lap 4. The Gleason driver set up leader Rayce Haase of Wausau for a crossover move, looking high going into the first turn and cutting inside Haase out of Turn 2 to take the lead.

Mondeik was never threatened the rest of the way in a caution-free race, slowly building a lead up to a full straightaway by the halfway point and cruising to his first feature win of the season after three feature triumphs at State Park a year ago.

Fast qualifier Jason Weinkauf of Merrill finished second, trailing Haase for must of the first two-thirds of the race before getting inside him on lap 40 and completing the pass for the runner-up spot two laps later. Brock Heinrich of Wausau also got by Haase five laps later and finished third, with Haase coming home fourth and Travis Volm of Wausau rounding out the top five.

The only other race to get started was the Rockstar Energy Drink Mini Stock semi-feature, but the race was halted before a lap was completed after a first lap incident. Jim Schara of Hamburg, who was driving the car of his daughter Amanda Rowe, spun on the backstretch and hit a light pole embankment. A red flag followed and rain began falling shortly after.

The abbreviated show comes after the season opener included a rain-shortened super late model feature and main events for the Advance Auto Parts Pure Stocks and Snap-on Mini Mods postponed to the following week. Last week’s show also saw qualifying rained out and a rain delay midway through before the program was eventually finished.

The mini stocks, pure stocks and mini mods all will race double features next week as part of a super-sized Flip Merwin Memorial, already one of the biggest shows of the season at State Park which will be even busier with three classes running two features plus the Bandoleros making their first visit to the track this season.