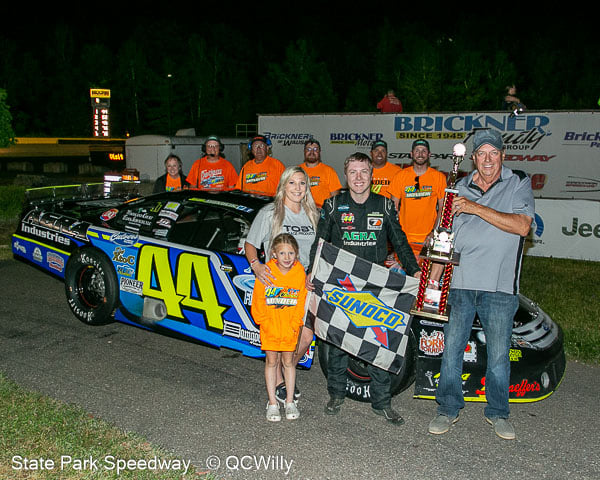 WAUSAU, Wis. (June 17) – After a sometimes bumpy start to his 2021 racing season, Justin Mondeik is returning to his form of a year ago at State Park Speedway.

The defending champion in the Auto Select Super Late Models completed a pair of repeats Thursday night, winning the feature at State Park for the second straight week and also winning the Dun-Rite Exteriors Flip Merwin Memorial for the second straight year. The Gleason native became the third driver to win consecutive Merwin races in the 18-year history of the race honoring the popular former racer and fan of the sport who was killed in a snowmobile racing accident in 2003.

Mondeik took the lead from Luke Fenhaus of Wausau on lap 25 in a battle of recent track champions to become the fourth leader in the race’s early going. The pass came one lap before a competition caution in the 75-lap feature, and would prove to be the deciding pass as he would lead the final 51 laps.

His last challenge would come on the lap 26 restart after the race’s lone yellow, with Brock Heinrich of Wausau moving up from fourth to line up outside Mondeik after Fenhaus and third-place Jeremy Lepak of Wausau both chose the inside lane to start behind the leader. Mondeik mashed the throttle quickly on the restart to get a good jump on Heinrich and needed less than a lap to clear him, with Fenhaus also getting past Heinrich for second.

From there Mondeik quickly built a lead of nearly a full straightaway, one he kept the rest of the way with the backdrop of a frequent display to the south beyond Rib Mountain, as storms passed south of the Wausau area but stayed away from the race track. Heinrich would get back by Fenhaus on lap 35 and was able to prevent the lead from growing even more but was unable to cut into it the rest of the way.

Lepak finished a solid third after an early side-by-side battle on the front row with Dillon Mackesy, who led the first six laps before Lepak led the next eight laps. Jason Weinkauf of Merrill came home fourth and Travis Volm of Wausau finished fifth.

Fenhaus also led early in the race in his first appearance at the track this year and appeared to have a strong car when he overtook Lepak with ease on lap 15. Mondeik followed right behind into second, and Fenhaus would soon after the lap 26 restart and eventually pulled off the track on lap 48.

Mondeik had some bad luck early in the season at State Park, including damage in a first-lap accident two weeks earlier, but is now the first two-time super late model feature winner this year at the track. He led the track a year ago with three super late feature wins in weekly racing and also added wins in the ARCA Midwest Tour Larry Detjens Memorial and in the track’s TUNDRA race.

Mondeik also joined Tim Sauter and M.G. Gajewski as drivers to win consecutive Flip Merwin Memorials at SPS. Sauter won the race in 2014 and 2015, while Gajewski won it three straight years from 2017-19.