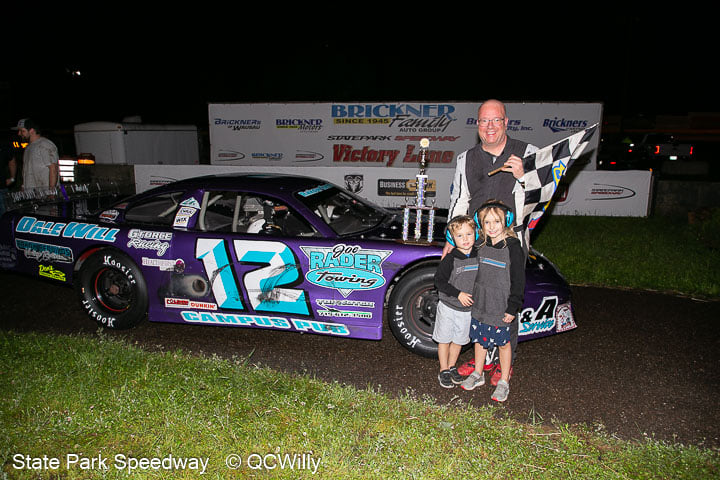 WAUSAU, Wis. (June 3) – Mark Mackesy dodged a bullet in a too-eventful start to the Auto Select Super Late Model feature, then ran off to another victory at State Park Speedway.

Mackesy won his first feature of 2021 at State Park, leading all 50 laps of the super late models’ main event on Ropa’s Pizza Night and the second night of racing this season at the track. He added to his lofty career win total at his home track with his 58th career feature, second-most all-time at the track behind only the late Dick Trickle.

Mackesy won a feature that was first delayed by rain, then delayed again after an incident at the end of the first lap that damaged a number of cars and resulted in all cars being sent to the pits for time to make repairs while two other feature were contested.

Rains first washed out qualifying and most practice sessions before racing started, and rain came again just before the final four feature races of the night, delaying racing for over an hour. The Rockstar Mini Stocks ran the first feature after the rains and the super late model feature was moved up to after the mini stocks in the program.

Mackesy started outside Rayce Haase on the front row and led by half a car length coming out of turn 4 on the opening lap when the cars made contact and Mackesy spun in front of the 11-car field. The resulting checkup included defending class champion Justin Mondeik taking the hardest hit, going head-on into the turn 1 tires while Haase, Dillon Mackesy and Jason Weinkauf also suffered damage to the noses of their cars.

All cars were able to drive away, including Mondeik’s badly damaged car, and the decision was made to run the Snap-on Mini Mods and Advance Auto Parts Pure Stock features before resuming the super late model main. The race resumed with all 11 cars in their original starting spots, including Weinkauf’s car bandaged together with tape across the entire front of the car and Mondeik with a radiator tied down with ratchet straps.

Mackesy led the first lap of the restart before a caution on lap 2 when A.J. Kreager, Noah Gajewski and Nathan Steif tangled in turn 3. Mackesy chose the top side again on the restart and drove away from Haase on the restart and would tow him the remainder of the race.

Haase remained in striking distance the rest of the race, often following 3-4 car lengths behind, but was unable to challenge through the 50-lap race. Cars ran single-file most of the event, with the toughest battle for third where Travis Volm held off Weinkauf for nearly 30 laps before Weinkauf won the battle of the No. 76 cars, nudging inside Volm on lap 41. Weinkauf would finish third with Brock Heinrich fourth and Volm finishing fifth.