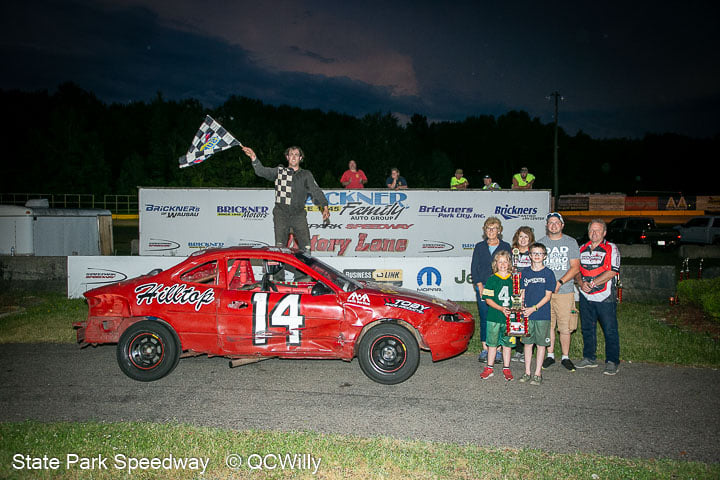 WAUSAU, Wis. (June 17) – Yet another State Park Speedway race night with a rain interruption, albeit a brief one this time, couldn’t prevent a trio of divisions from putting on exciting feature races in the Dun-Rite Flip Merwin Memorial.

Wausau natives Eric Breitenfeldt, Brian Schramm and George Seliger all picked up hard-fought feature wins as the weather finally cooperated-mostly-at the Rib Mountain 1/4-mile track. The fourth straight race night of the season was affected by a light shower just before feature racing, but the track was dried quickly and lightning to the south stayed away, allowing for the completion of the full program.

Breitenfeldt was a double feature winner, winning a pair of 20-lap main events in the Rockstar Energy Drink Mini Stocks. He continued a sizzling run in the class that includes him being the first driver at the track with three feature wins this season.

Breitenfeldt’s first feature win pf the night came after a hard-fought battle with Ashley Schoone of Gleason, who was aiming to win the mini stocks main on Merwin night for the fourth straight year. The two raced side-by-side for the lead for six laps late, with Schoone hanging tough on the outside even after Breitenfeldt was able to get inside of her on lap 12.

Breitenfeldt finally was in the clear and looked to have smooth sailing for the win when Brad Lecher’s car stalled on the backstretch on lap 18, resulting in a double-file restart with three laps to go. Schoone again hung tough for more than a lap after the green flag dropped, trailing by less than a car length when the cars crossed the line with two to go before Breitenfeldt cleared her again on lap 19 and drove to the win.

The Mini Stocks also ran a second feature later in the night, making up their race that was rained out a week earlier. The sailing was smoother for Breitenfeldt this time, as he got by Schoone for second on lap 6 and passed Lecher one lap later for the top spot. He would lead the rest of the way for his seventh feature win in the class at State Park in less than a year.

Schramm earned his first feature win of the season in the Advance Auto Parts Pure Stocks, edging Mitch Stankowski of Wausau by half a car length in the 25-lap feature.

Schramm got to the front quickly, taking the lead from Brandon Knoblock on the third circuit and building a big advantage. That lead evaporated soon after Stankowski moved into second on lap 8, and the night’s fast qualifier was to Schramm’s bumper by lap 18.

Stankowski drove to the outside of Schramm one lap later, and the two raced side-by-side for the final six laps. Schramm held a slim lead at the line every lap, though, and held on for the win with Jeff Spatz of Wausau also in the mix at the end and finishing a close third.

Seliger won his second feature this season in the Snap-on Mini Mods, holding off Joe Kuehn as well as a late charge from Kole Ferge in a 25-lap battle that went to the wire.

Seliger had Kuehn in his tire tracks for the final 13 laps and held strong when Kuehn took several looks to the inside, including slight contact in turn 3 on lap 24. Seliger held the inside and would remain there to win, while Ferge closed in on the leaders on the final lap and snagged the runner-up spot by inches at the finish.

The Ropa’s Pizza Bandoleros presented by E.H. Wolf & Sons also made their first appearance at State Park this season, and Alex Hartwig of Portage extended his run of dominance in the class with the feature win.

Hartwig zipped through the field from his 10th starting spot to the lead in just four laps, overtaking Cohen Henze of Juda for the lead in the fourth turn on lap 4 and leading the rest of the 12-lap race. Hartwig won his sixth straight feature in the class at SPS, including taking all five Bandolero features last year on the way to his second straight points crown in the class.

Brad Abt of Schofield and Kendra Baumann of Wausau also picked up semi-feature wins in the mini stocks. The mini stocks would be the lone class to race double features for the evening after drivers in both the pure stock and mini mod classes agreed to race for double points in their lone events of the evening instead of racing a second feature race as a makeup from being rained out a week ago.

Next week at State Park Speedway will be Kid’s Night sponsored by the Wausau Noon Optimists, with bicycle races on the track for kids at intermission. The night also will include the fifth annual Dave Lashua Memorial for the pure stocks as part of a full show also including super late models plus mini mods and mini stocks. Fred Mueller Qualifying begins at 6 p.m. with racing to follow at 7 p.m.