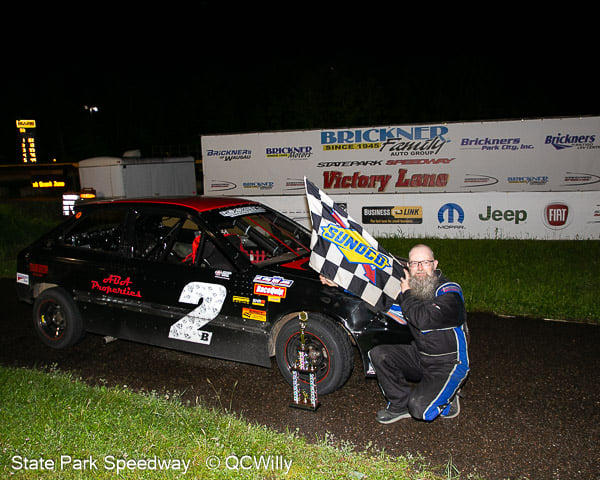 WAUSAU, Wis. (June 3) – One of the original mini stock drivers at State Park Speedway is back as a factor at the top of a division he got off the ground at the track more than 20 years ago.

Wausau’s Chris Boykins picked up his first feature win of the season in the Rockstar Energy Drink Mini Stocks, leading the final 15 laps of the 20-lap feature. He picked up one of a total of six feature wins among four classes and on a second straight rain-delayed night at the quarter-mile speedway.

Boykins started third in a field of 12 in the feature on Thursday and made his move to the front on lap 5, getting inside Wausau’s Brad Lecher for the lead. Amanda Rowe also followed to move into second, but Boykins pulled away and built nearly a straightaway lead by the middle of the 20-lap race.

Rowe held off defending mini stocks champion Garret Strachota for the runner-up spot until drifting high on lap 11, allowing Strachota, Eric Breitenfeldt and Tom Lecher to get by, but none could put much of a dent into the Boykins lead over the final laps. Strachota held off Breitenfeldt for second with Lecher fourth and Rowe fifth.

Boykins won the first two season championships in the mini stocks division in 1999 and 2000. He returned to weekly racing at State Park last year after a long break, building a new car this year after finishing 11th in the point standings a year ago.

The Advance Auto Parts Pure Stocks and Snap-on Mini Mods also raced double features, after their main events were rained out on opening night May 20th. Four different drivers picked up feature wins over four races, including Jeff Spatz and Alex Volm in the pure stocks and Joe Kuehn and George Seliger in the mini mods.

Spatz won a hairy first 20-lap feature in the pure stocks, holding off first Brian Schramm and then Mitch Stankowski in side-by-side battles. Spatz cleared Stankowski on the inside on lap 18 and in all led 16 of the 20 laps.

The first pure stock feature included a pair of incidents with cars ending up parked against infield light poles, including on lap 18 when Stankowski lost a left rear tire and spun in turn 3, with Volm spinning to avoid him and nosing into a light pole between turns 3 and 4. A yellow also came out three laps earlier when Schramm and Brian Plisch locked up coming out of the second turn, and both ended up in a turn 2 pole. All four cars sustained damage, but remarkably all but Stankowski were running at the finish.

The second feature saw a side-by-side battle between Volm and Stankowski much of the way in the always-exciting class. The two raced door-to-door for 15 of the 20 laps with Volm holding the inside while Stankowski, back with a repaired axle after the first feature, ran the outside as well as anyone could all night on the rain-washed track.

That included the final five laps after a late restart, where Stankowski even held a brief lead at the line on laps 18 and 19. The final lap saw Volm able to move back ahead coming out of the second turn onto the backstretch, and he would hold on at the line by half a car length for his first feature win of the season.

Kuehn won the first race of the night and the first of two features in the mini mods, making a late pass of Jim Lietz to win the 20-lap race. Kuehn worked inside of Lietz on the 18th circuit, cleared him on the white flag lap and went on to win his first feature at State Park since Aug. 2017.

Kuehn came from the ninth starting spot to win and patience paid off after he ran behind Lietz for the final 10 laps. Lietz finished second after leading most of the way, including holding off an outside challenge from George Seliger for much of the race.

Seliger would come back to win the second feature, overtaking Dale Louze for first on the outside on lap 9, one lap after Louze had overtaken early leader Brian Marquardt for first. Seliger would lead the final 11 laps and crossed the line three car lengths ahead of Kuehn, who closed in briefly before the leaders navigated lapped traffic in the final laps.

Rains washed out most of practice laps as well as qualifying before racing started, and the rain came again late in the mini stocks semi-feature. Schofield’s Brad Abt won the 15-lap race which was called with six laps remaining, and a one-hour delay followed before the night’s final four feature races were completed.

Racing continues at State Park Speedway next week with a full show including super late models plus support divisions. Fred Mueller Qualifying begins at 6 p.m. with racing to follow at 7 p.m.