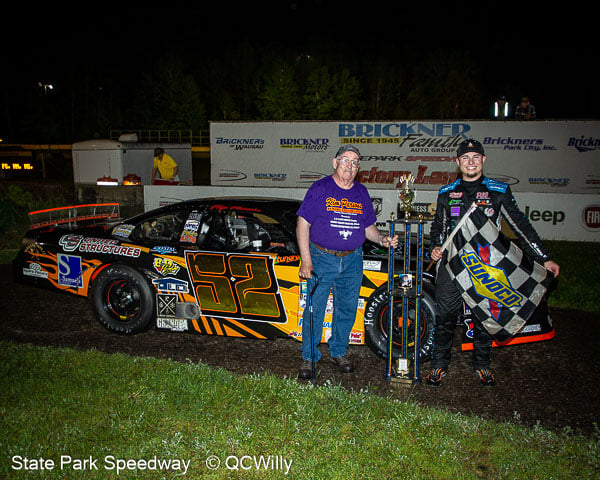 WAUSAU, Wis. (May 20) – It took Brock Heinrich nearly two years to win his first super late model feature at State Park Speedway, but not nearly as long for his second.

Heinrich won a rain-shortened feature in the Auto Select Super Late Models presented by C-Tech on opening night for the 2021 season at State Park. The Wausau driver led all 49 laps of a race originally scheduled for 60 laps but called with 11 laps remaining as rain moved into the area just before 11 p.m.

Heinrich outran defending division champion Justin Mondeik for the victory and earned his second-ever super late model feature win at State Park. He backed up his first feature win in the class from August of last year.

Heinrich started on the outside of Mark Mackesy on the front row of a 12-car feature and held a slight edge for the first two circuits. The second lap ended with the leaders making slight contact and Mackesy spinning into the infield, with an ensuing checkup of cars seeing super late model rookie A.J. Kreager receiving damage that ended her race.

Much of the remainder of the race had Heinrich and Mondeik running 1-2, after Mondeik got by Travis Volm on the fifth lap to move into second. He caught Heinrich by lap 17 and was in his tracks for the next 20 laps, getting as close as Heinrich’s bumper coming out of turn four on lap 31 when the first stray rain drops started to fall.

A spin by Nathan Steif set up a restart on lap 36, and Heinrich initially cleared Mondeik only to have the Gleason driver back to his bumper five laps later. Mondeik started to fade from there, though, and Heinrich had a 10-car length lead on lap 50 when Jeremy Lepak and Gabe Sommers made contact with Lepak spinning on the backstretch. Heavy rain began falling under caution and the race was called there, with the final two features for the Advance Auto Parts Pure Stocks and Snap-on Mini Mods being rained out for the night.

Volm finished third in the feature with Dillon Mackesy fourth and Mark Mackesy fifth. Both Mackesys also won heat races, and Lepak was the fast qualifier with a quick lap of 13.589 seconds.