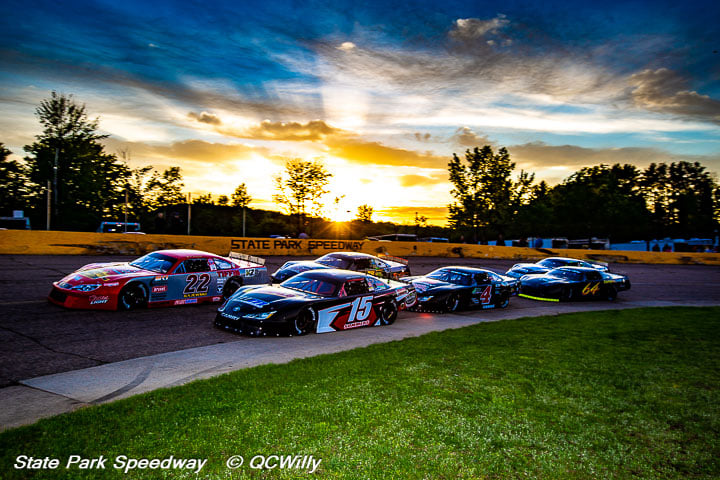 WAUSAU, Wis. (May 19) – A new racing season at State Park Speedway will begin with a splash, with regular divisions joined by the Midwest Truck Series on opening night Thursday at the quarter-mile asphalt race track in Rib Mountain.

The 12th season of racing at State Park under the ownership of Ron and Scott Wimmer will begin with Auto Select Super Late Models presented by C-Tech, Advance Auto Parts Pure Stocks, Snap-on Mini Mods and Rockstar Energy Drink Mini Stocks all on hand. The Midwest Truck Series traveling tour also will make its first stop at the speedway since 2019 and will have a strong field of cars racing for a 50-lap feature race.

James Swan of Genoa City won the last Midwest Trucks race at SPS back in 2019, and he is the defending champion in the class and also leads the point standings after two races this season. Tristan Swanson of Elko, Minn., is second to Swan in the points and won the series’ most recent race at Madison International Speedway.

A number of drivers from the Wausau area race on the Midwest Truck Series and will race Thursday, including Jerry Brickner, Bradley Gajewski, A.J. Kreager and brothers Rock and Ross Christiansen. A total of 24 trucks have entered for the race.

The race also will be the first at SPS this year for the track’s four regular weekly divisions. The Auto Select Super Late Models will contest a 60-lap feature on opening night, with defending champion Justin Mondeik leading the charge.

The Gleason native won his first super late model championship at the track last season after near misses each of the previous two years, and in a competitive class that saw seven different winners in nine weekly shows he was the premier driver all season. He won the Larry Detjens and Flip Merwin memorial races and also led the division with three feature wins in weekly racing.

“I feel confident going into the opener,” said Mondeik. “I know we have a great baseline and didn’t have to change much all year last season. It will be an interesting year with the tire ‘shortage.’ For that reason I’m thankful for our baseline.”

Brian (Butchie) Schramm of Wausau won his third consecutive championship in the Advance Auto Parts Pure Stocks in 2020, and he’ll be back for a run at a fourth straight title and his seventh all-time among three different divisions over 25 years at State Park Speedway. Mosinee’s Alex Volm will be among his top challengers after finishing eight points behind Schramm two years ago and fourth in points last year despite his share of bad luck throughout the season. Wausau’s Brett Breitenfeldt also will be joining the class after racing a Central Wisconsin Racing Association (CWRA) late model in recent years.

The Snap-on Mini Mods will have a new look this season with two-time defending champion Greg Blount taking a season off from the class and third-place finisher Noah Gajewski moving up to the late model ranks. Wausau’s George Seliger is a three-time champion in the class, while among those moving up to the class include Chad Ferge of Weston from the mini stocks.

The Rockstar Mini Stocks featured the best points battle at the track last season, coming down to the final laps of the final race before Wausau’s Garret Strachota won his second championship in the class, edging Kyle Check of Shantytown by three points. Eric Breitenfeldt of Wausau came on strong at the end of the season and finished third, just 17 points behind Strachota while also winning rookie of the year honors. All three are expected to race regularly again at SPS again this year.