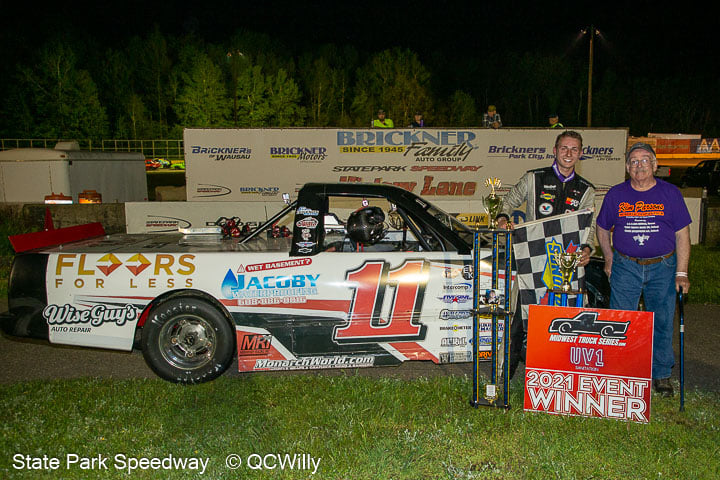 WAUSAU, Wis. (May 20) – The first visit to State Park Speedway by the Midwest Truck Series in two years produced what turned into a 50-lap marathon, as well as a first-time winner at the track.

Bryce Miller of Columbus stayed out of the trouble that many others were unable to avoid and visited Brickner Family Auto Group Victory Lane for the first time at State Park. He took the lead in the second half of the race and pulled away from Kody Hubred on a final restart with four laps left to win the third leg of the Trucks series tour in 2021.

Miller waited patiently in third place much of the race but moved up to second after a lap 31 incident and made his move soon after to take the lead. He then navigated lapped traffic cleanly and appeared home free until Tyler Noble hit the wall on the front straight on lap 47, setting up a final four-lap dash to the finish.

Miller got a quick jump on the restart and needed just two laps to build a five-car length lead over Hubred. He cruised to the win followed across the line by Hubred with Brad Kossow third, Danielle Behn fourth and Tristan Swanson fifth.

Miller had one of the fastest trucks all night from practice on, but he also avoided the trouble that hit a number of others in a feature that included eight cautions, including a pair of red flags for lengthy cleanups.

A stout field of 23 trucks started the race but the first yellow came after just one completed lap after Noble spun into the turn two tires on lap 2, just after Kenny Joosten had passed inside polesitter Behn on the first lap.

The first attempt at a restart saw the first of several chain reactions in the race that would damage a number of contenders. A checkup on the front row saw Chris Blawat get spun into the wall and a number of other cars taking some damage, including Wausau’s A.J. Kreager, who blew away the State Park Midwest Trucks track record but spun into the infield.

Joosten and Hubred would contest the lead for the next 28 laps, with Joosten leading the first eight laps until Hubred got by him on lap 9. The two would work through lapped cars successfully until lap 31, when Joosten tapped Hubred while both were trying to get by another lapped car, with Hubred spinning.

The top two were awarded their spots back for the restart with 20 to go, but on the first lap after green Joosten drifted up the track in turn four, and another checkup saw Kreager, Ross Christiansen and Derek Doerr spinning and collected on the front stretch and Alex Braseth getting the worst of it, hitting the wall in turn one.

Miller had followed close behind the top two for most of the first 30 laps, and he got his chance for the lead on the lap 31 restart. He started outside Hubred on the front row but worked to the inside of him on lap 32 and cleared him a lap later and led the final 19 laps.

Four drivers from the Wausau area competed in the truck race but all had tough nights. Kreager battled through multiple incidents to finish 10th, Bradley Gajewski finished 18th, Rock Christiansen was 21st and Ross Christiansen 22nd. Even with many sporting rumpled fenders, eighteen trucks remained running at the finish of the 23 to start.

The first Rockstar Energy Drink Mini Stocks feature of 2021 looked a lot like the end of 2020 in the division, including another dominant performance by Wausau’s Eric Breitenfeldt.

Breitenfeldt needed just three laps to zip from the 12th starting spot to the lead, and he cruised the rest of the way to the win in the 20-lap feature. The leader in the class in feature wins in 2020, Breitenfeldt won his third straight feature in the class dating back to last season.

Running second to Breitenfeldt was Garret Strachota, the defending champion in the mini stocks. Strachota joined Breitenfeldt in moving to the front quickly, starting eighth but inheriting the runner-up spot after leaders Tyler Muller and Jake Halterman tangled briefly on the fourth lap, causing a chain reaction backup that saw Kyle Check get the worst of it and sliding into the front stretch wall.

Strachota finished second to Breitenfeldt, 12 car lengths back at the finish, while Ashley Schoone of Gleason was third, fast qualifier Tom Lecher of Wausau fourth and Mosinee’s Amanda Rowe coming in fifth.

Rains arriving just before 11 p.m. resulted in the features for the Advance Auto Parts Pure Stocks and Snap-on Mini Mods being rained out. In the lone pure stock race of the night, Jeff Spatz of Wausau won the heat. Heats in the mini mods went to Dave Lembke of Germantown, doing double duty on the night also racing his green 06 car in the mini stocks, and to Joe Kuehn of Wausau.