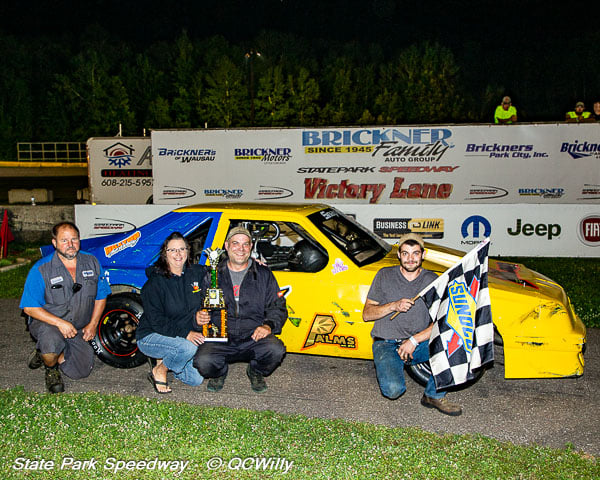 WAUSAU, Wis. (Aug. 13) – A few weeks after he thought his season might be over, Kevin Tessmer returned to State Park Speedway and broke through for one of his biggest wins ever at the track.

Tessmer held off a trio of strong cars to win the Snap-on Mini Mods feature on Corn Night at the track. He led the final 15 laps of the 20-lap race for his first-ever feature win in the class and first feature victory since running in the mini stock division in 2018.

Tessmer was back out at the track for the first time since blowing an engine during the Larry Detjens Memorial in July. He took the lead from John Lietz on the fifth lap and held the point the rest of the way, though he had company.

Noah Gajewski, George Seliger and Greg Blount loomed right behind Tessmer much of the race, including Gajewski and Seliger racing side-by-side on his rear bumper for eight laps. Seliger finally cleared Gajewski on lap 18, but did not have enough time to catch Tessmer and finished second. Blount finished third, seeing his streak of four straight feature wins snapped.

“This is amazing,” said Tessmer in Brickner Family Auto Group Victory Lane after the race. “You know it was a heck of a last two weeks, when I blew up my motor I thought we were done for the year.”

An evening of first-time feature winners in 2020 also included the Advance Auto Parts Pure Stocks division, where it took patience and then a bold move by Mitch Stankowski on the final lap to win another thriller in the class.

Running second on the final lap, Stankowski showed high and then dipped down to the grass coming out of the second turn to sneak inside Brian Schramm. Stankowski would get in front of Schramm by a nose on the backstretch and held him off by a car length at the finish to lead his only lap of the 20-lap race. He become the seventh driver in the class to win a feature this year, notching his first after three second-place finishes and three more thirds this season.

“Well it was a dirt move, I raced on the grass back there, somebody had to do it,” said Stankowski, who also races on the dirt at Shawano Speedway. “We’ve raced hard a lot of times…it’s hard racing, it’s fun.”

Schramm settled for second after leading most of the way. He battled side-by-side with Jeff Spatz for the first 14 laps where the two swapped the lead five times. Schramm finally cleared Spatz and appeared in good shape for the win until Stankowski moved into second as the cars came to the white flag.

An already tight points race in the Rockstar Energy Drink Mini Stocks became even closer Thursday as Tyler Custer won the feature for his third feature win of the season.

Custer made the high line work on his way to victory. The Stratford driver first navigated an early traffic snarl in the opening laps by making a three-wide pass on the outside, and he took the lead on lap 12 with a pass on the high side of Amanda Rowe, finally clearing Rowe three laps later.

Custer pulled away from a furious pack of side-by-side racing behind him and built just enough cushion in the 25-lap feature to hold off a hard-charging Dave Lembke, who also used a high line around the track to finish second. Custer also closed within 19 points of division leader Garret Strachota, who finished fourth in the feature, while Kyle Check finished sixth and is nine points behind Strachota in second place.

Kendra Baumann also was a double-winner on the night as part of the Wib Baumann Memorial in her late grandfather’s name. Baumann won the first heat and the semi-feature, while Rowe added a win in the second heat and Check took the third heat.

Alex Hartwig continued his dominance in the Ropa’s Pizza Bandoleros, remaining undefeated in the class at State Park this summer with his fourth feature win in the class’s four visits.

Hartwig didn’t need long to get to the front. He worked through a logjam in the opening laps to go the 10th starting spot to third by the third lap, and one lap later he slipped inside of Anna Malouf for the lead. The Portage driver then easily pulled away on two late-race restarts after cautions, with Jevin Guralski finishing second and Malouf coming in third.

Next week will be the 12th annual Wayne (Lodi) Lodholz Memorial. Super late models, pure stocks, mini mods and mini stocks will race, and it also is season championship night in the Bandolero class. The night starts with Fred Mueller Qualifying at 6 p.m. and racing to follow at 7 p.m.