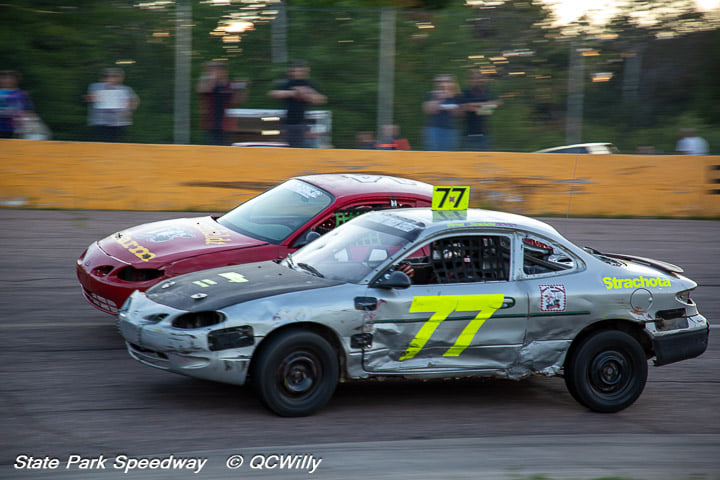 WAUSAU, Wis. (Aug. 27) – It was only fitting that a season-long championship battle between Garret Strachota and Kyle Check came down to a race for position in their final race of the season at State Park Speedway.

While Eric Breitenfeldt of Wausau finished a scorching-hot run at the end of the season with another win, it was Strachota who won a fight with Check for third place early in the 25-lap Rockstar Energy Drink Mini Stocks feature on season championship night. That’s how the two would finish with Strachota in third and Check placing fourth, and the difference in positions gave Strachota the season championship over Check by three points in the final standings.

Strachota won his second mini stock championship at SPS and first since 2017. He entered the night two points behind Check in the point standings, but the five-point difference between third and fourth in the feature was the decider in a division that had three drivers separated by 15 points at the top entering the night.

Breitenfeldt dashed through the field for his second straight feature win, third in weekly points races at State Park and his fourth of the year, all coming in just over a month. He drove from the 11th starting spot to the front with a pair of three-wide passes early and overtook Gleason’s Ashley Schoone for first on lap 7.

“We didn’t unload the car off the trailer from Saturday at Marshfield until last night at about 6 o’clock,” said Breitenfeldt, who also clinched rookie of the year honors in the class.

“Considering how terrible I was at the start of the year and how far I’ve come, it’s been amazing.” Breitenfeldt also credited Strachota for helping him get started racing, and he gave a nod to his friend after the race: “To see Garret win the championship tonight is awesome.”

The race for the championship took place behind Breitenfeldt and Schoone and was decided after a side-by-side battle between the two points leaders. Check led Strachota on the track in the early stages, but the two started next to each other on a restart four laps into the race, and Strachota got by Check on the inside on lap 10 to take over third.

Check would stay on Strachota’s bumper for the next five laps, nearly getting inside him off the second turn on more than one occasion. Slowly, though, Strachota pulled away, and he would finish six car lengths ahead of Check at the finish.

Schoone finished second to Breitenfeldt for her best feature finish since July 24, when she won the feature on the opening night of the Larry Detjens Memorial. Chad Ferge of Weston rounded out the top five, coming in fifth.

Tyler Custer of Stratford also was in the hunt for the season championship entering the night, coming into the evening in third place and just 15 points behind Check. He qualified ahead of both Check and Strachota and also won the third heat to get even closer to both, but his chances ended with a damaged rear rear wheel causing him to lose a tire in turn four on the fifth lap.

George Seliger of Wausau closed the season winning the Snap-on Mini Mods feature on a night when Marathon’s Greg Blount clinched his second straight championship in the class.

Seliger took a circuitous path to his fourth feature win of the season. His feature race looked like it was over less than half a lap in, as his car let loose a trail of oil in turns one and two, requiring Seliger to make a good save just to keep the car out of the outside wall.

A faulty oil filter seal ring was the culprit, and after a repair while oil was cleaned up on the track, Seliger was back out on the track. Starting from the back, it took him five laps to get to the lead, as he started outside Gary Garand on a lap 5 restart and cleared him two laps later.

Seliger would pull away and win by a straightaway with Garand outlasting Blount for second after the two dueled side-by-side for eight laps. Blount finished his championship season with his 13th top-three finish in 13 races, part of a dominant year when he also set fast time in Fred Mueller Qualifying all 13 race nights for the class.

Wausau’s Jeff Spatz held off a last-ditch charge by Dave Cabelka to win his second Advance Auto Parts Pure Stocks feature of the season on a night when Brian Schramm of Wausau also wrapped up his third consecutive championship in the class.

Spatz started on the pole and led all 20 laps to become the fifth two-time winner in the class this season. He led by as many as six car lengths but saw his lead evaporate in the final laps as fast qualifier Cabelka moved into second late and got to Spatz’s bumper with a lap to go. Spatz held on to finish a car length ahead of Cabelka, while two-time defending feature winner in the class Mitch Stankowski placed third.

Schramm finished fifth in the feature and made it three straight titles in the class after finishing in the top five in all 12 features this year. It also was the veteran’s sixth track championship at State Park.

A mechanics race was also held at the close of the night, and Josh Willhite of Wausau won the 12-lap race driving the mini mod car of Snappy Joe Kuehn, getting past Max Manowski on the final lap.