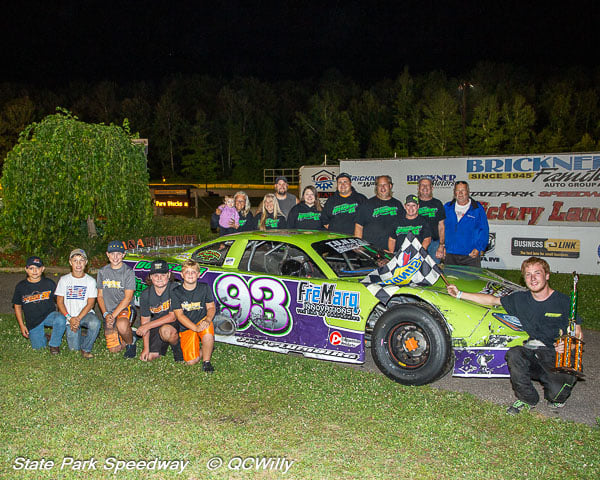 WAUSAU, Wis. (Aug. 13) – It’s no surprise to see a Mackesy in victory lane at State Park Speedway, and a new one joined the ranks of super late model feature winners at the track Thursday night.

“I was really getting sick of this second-place stuff,” said Mackesy in an emotional Brickner Family Auto Group Victory Lane where he was surrounded by family and friends. “All I’ve ever dreamed of as a kid is to win a super late model feature here.”

Dillon Mackesy took the lead for good on lap 28, edging back ahead of Heinrich following a side-by-side restart on lap 26. Heinrich got a good jump and led laps 26 and 27, but Dillon fought back to lead the next lap and clear Heinrich on lap 29.

Mark Mackesy also followed nephew Dillon through, slipping inside Heinrich for second. And while Dillon slowly pulled away from the rest of the field, Mark spent the final 20 laps fending off Justin Mondeik, the dominant car at the track this year with five feature wins, including three in weekly super late racing. Mondeik looked high and low, but the veteran held him off at every turn and finished second, eight car lengths behind the winner.

Dillon Mackesy started outside uncle Mark on the front row of the feature, and the two raced side-by-side for the first seven laps. Mark led the opening three circuits before Dillon edged ahead on lap 4 and cleared him on lap 8.

Heinrich also got by Mark Mackesy and ran second to Dillon for the next 17 laps, getting to his bumper on lap 20. He tried a pass outside but settled back into second before the competition caution halfway through the race.

Mondeik finished third with Heinrich coming in fourth. Travis Volm rounded out the top five, getting by Mike Olson in the final laps after a long battle between the two for position.