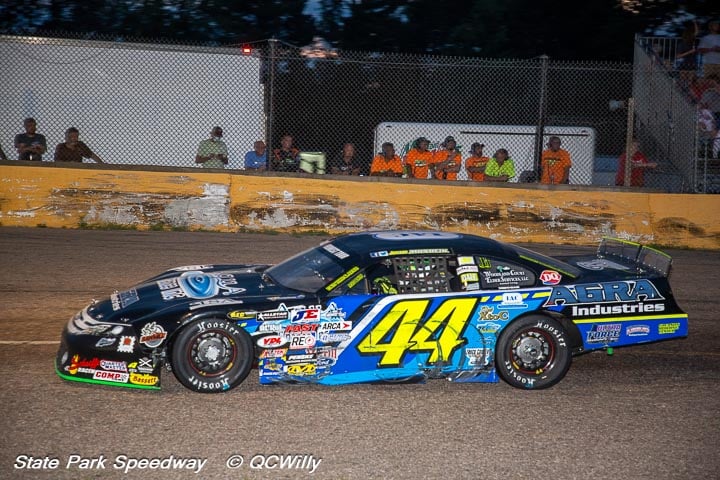 After several years of success but also some near misses and paying dues, just about everything is coming up aces for the Gleason driver this year, especially at his home track. Mondeik added another big win at State Park Speedway to an impressive resume in 2020, winning the TUNDRA Agra Industries 75 on a rain-slowed but eventually completed night at the track.

Mondeik scored his first win in the traveling super late model series at SPS and his fifth feature win of the year at the track. It also was the 12th feature win this summer in 24 races for Mondeik, who has dominated big races at State Park. He also won the Flip Merwin Memorial and Larry Detjens Memorial, the latter marking his first win on the ARCA Midwest Tour just two weeks earlier.

Mondeik holds the points lead at State Park and Golden Sands Speedway, and his latest victory also puts him in the thick of contention for a possible first-ever TUNDRA championship. He also delivered the victory on a night when one of his chief sponsors throughout his racing career stepped up to sponsor the event and added a $550 bonus to the winner.

“It was really cool to finally get a Larry Detjens Memorial win here (and) we’re excited that TUNDRA came, we thought we would have a good car,” said Mondeik after the race in Brickner Family Auto Group Victory Lane. “We’re definitely gunning for this TUNDRA championship, we were so close the last two years, and we’re coming for it.

“To win in front of our home crowd, especially since one of my primary sponsors stepped up and sponsored the event tonight, can’t thank them enough for all the support they gave me for seven years now. They’re the reason we are where we are today.”

There’s no denying Mondeik has had a dominant car at State Park this year, including Saturday night when he set the fastest time among 28 TUNDRA super lates on hand. This time, a little bit of good fortune didn’t hurt, either.

The 75-lap feature went green save for one caution flag on lap 46, when Wyatt Brooks spun on the front stretch coming out of turn four. Jordan Thiel of Darboy was in control up until that point, taking the lead from the inside pole and holding the point the first 45 laps.

Mondeik was running fourth at the time, having spent the previous 10 laps trying to get around Verona’s John Beale. He was just setting up his third attempt on the outside of Beale when the caution came out.

The barrel was brought onto the track giving drivers their choice of restarting on the inside or outside lane, and Thiel chose the inside of the front row as expected. Both Mackesy and Beale also chose to start on the inside lane, though, the seas parting and allowing Mondeik to zoom up to the outside of the front row for the restart. When the green flag was thrown, it took him less than a lap to clear Thiel, and from there he cruised, never threatened again as he won by six car lengths over runner-up Thiel.

“Yeah, that was definitely a gift for us, we were hoping for that,” said Mondeik after the race. “We thought maybe Beale would go to the outside. I wasn’t sure if he would be able to get it done on the top, so we were contemplating starting fifth, which would put Casey (Johnson) to our outside. So it definitely worked out for us.”

The yellow flag was definitely not what Thiel wanted in pursuit of his first-ever TUNDRA win. It was déjà vu to a degree for the driver from the Kaukauna area, who also led the series’ 2018 race at SPS for the first 32 laps from the pole.

“Not one bit,” said Thiel after the race when asked by TUNDRA series announcer Matt Panure if he wanted to see Mondeik’s No. 44 on the outside on the restart. “I was worried about him the whole time, and as soon as I saw him pull up there, I knew it was trouble.

“I definitely could’ve done without that first caution, but happy to finish podium. To bring it home in one piece and top three and with this crowd, can’t complain.”

Thiel led the way through the first 45 laps with two-time SPS regular and Wausau favorite Mark Mackesy running behind him. He worked his way through lapped traffic smoothly starting on lap 23, and after Mackesy briefly closed to his bumper in traffic he pulled back out to a five car length lead before the caution.

Defending TUNDRA champion Casey Johnson of Edgerton passed Mackesy with six laps left on his way to finishing third, following up his win in the TUNDRA race at State Park last year and finishing in the top three of the track’s TUNDRA date for the third straight year. Mackesy finished fourth with Wausau’s Brock Heinrich coming in fifth.

Beale outlasted Gabe Sommers for sixth, with James Swan, Jake Zellmer and Michael Ostdiek rounding out the top 10. Sixteen of the 22 cars starting the feature finished on the lead lap and all 22 cars were running at the finish.

The show was hustled through but eventually delayed when looming rain showers arrived at the track just before the completion of the Wisconsin Sport Trucks feature. Racing was delayed for nearly two hours, but the track was eventually dried just before 10 pm and the mini stock, pure stock and TUNDRA features were completed.