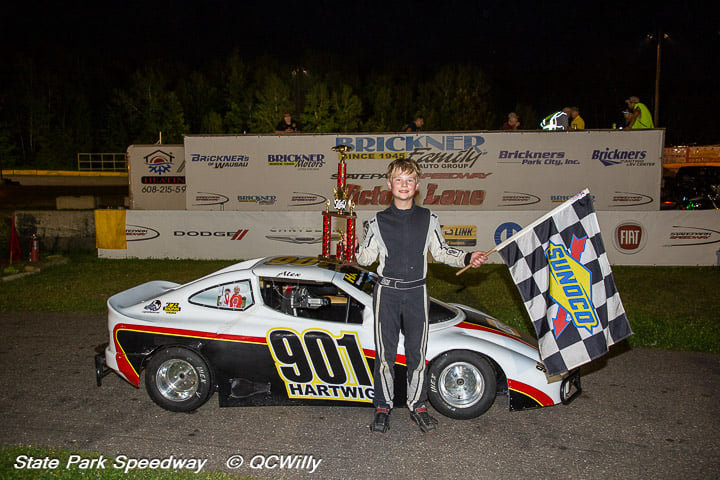 The youngster from Portage continued to build an impressive resume racing in a Bandolero car, winning his second straight track championship in the Ropa’s Pizza Bandoleros division. He also completed a dominant season at State Park with his fifth feature win, finishing with a sweep of all five nights of racing for the class this year.

Hartwig finished a season when he was untouchable in feature events by once again getting to the front quickly during the Wayne ‘Lodi’ Lodholz Memorial. Starting 10th in a field of 11 cars, he took the lead from Rhinelander’s Anna Malouf on the eighth lap and led the rest of the way in the 20-lap feature race.

Hartwig also pulled away quickly on a restart with four laps to go, when regular top challenger Jevin Guralski of Wausau started alongside him on the front row. Hartwig cleared him within a lap and led the rest of the way, with Guralski finishing second to him for the fifth time this year. Malouf came home third after leading for two laps early, Cohen Henze of Juda finished fourth and rookie Collin Murphy of Janesville had his best-ever feature finish at the track, coming home fifth.

One track championship was decided Thursday night and several others came into clearer focus heading into their final night of racing next week. The battle for the Rockstar Energy Drink Mini Stocks title will come down to the final race, though, and perhaps the final lap of the season for the class after Eric Breitenfeldt’s feature win Thursday.

Breitenfeldt made a quick move to the front going three-wide on the high side, roaring from his 10th starting spot to second in less than two laps. The Wausau racer passed Chris Boykins of Wausau for the lead on lap 4 and checked out from the field twice to claim the 25-lap feature for his third feature win of the season at the track.

Kyle Check of Shantytown finished second, with Tyler Custer of Stratford third and Wausau’s Garret Strachota fourth. Check made up 11 points on previous leader Strachota and now holds a two-point lead over him in the points entering season championship night, while Custer is just 15 points behind Check. Breitenfeldt also is in the picture, 31 points behind the leader with one race left.

Breitenfeldt built a huge lead until second-place running Dave Lembke of Germantown spun after contact and nosed into a barrier outside a light pole on the back stretch on lap 16 to bring out the caution. The first ensuing attempt at a restart also did not get far as traffic stacked up causing Ashley Schoone and Chad Ferge to spin and Lembke went hard into the turn one wall attempting to avoid them. Breitenfeldt did pull away quickly on the next restart and went on to win easily while Check held off Custer for second.

Mitch Stankowski of Wausau won his second straight Advance Auto Parts Pure Stocks feature with a dramatic pass for the lead for the second consecutive week.

Stankowski made a last-lap pass in the grass to get by Wausau’s Brian Schramm for the lead last week, and this time he went low in an attempt to pass Jeff Spatz for the lead Thursday night on lap 13 of the 20-lap feature. Spatz got loose coming out of the fourth turn and was sideways on the front straight before collecting his car, but not before Stankowski took the lead.

Schramm also got by Spatz for second and even got to Stankowski’s bumper on lap 13, but Spatz was able to get back by Schramm a lap later for second and would finish there behind Stankowski. Alex Volm finished third and Kolton Guralski placed fourth, with Schramm finishing fifth.

Schramm still all but wrapped up the pure stocks points championship, as he heads into the final week with a 60-point lead over Guralski. Greg Blount of Marathon also holds a 60-point lead in the Snap-on Mini Mods class after his fifth feature win of the season Thursday.

Blount passed George Seliger of Wausau for the lead with three laps to go after a nearly race-long chase. He pulled away in the final laps and closed in on his second straight championship in the mini mods.

Seliger took the lead from John Lietz on the third lap and had Blount in hot pursuit behind him for the next 15 laps. Seliger held off multiple attempts by Blount on the outside, but with the laps winding down the points leader was able to nose inside Seliger in turn one on lap 18. Noah Gajewski of Marathon also was able to get inside Seliger for second.

The final night of weekly racing at State Park Speedway this season will take place next Thursday. It also will be Fighting Cancer Full Throttle Night, and track champions will be crowned for the super late models, pure stocks, mini mods and mini stocks. The night starts with Fred Mueller Qualifying at 6 p.m. with racing to follow at 7 p.m.